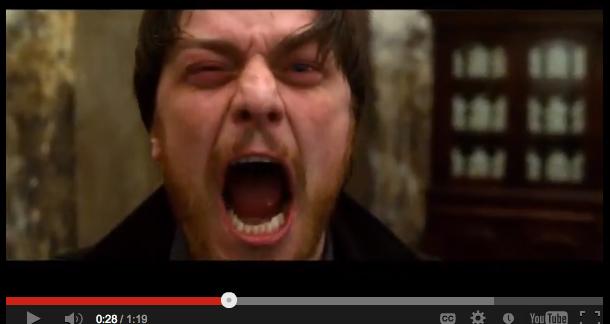 Recently, we reported on the precarious state of Danny Boyle's hopes at directing a Trainspotting sequel by 2016. We may have to hang in balance for that one, but fans of Irvine Welsh can look forward to another book-to-film translation coming sometime in the fall.

According to SlashFilm, Filth, based on Welsh's 1998 novel of the same name, is written and directed by Jon S. Baird (Green Street Hooligans) and stars James McAvoy as Bruce Robertson, "a corrupt cop trying to solve a brutal murder while clawing his way to the top." The score is by Clint Mansell, who is the bad ass behind most Darren Aronofsky film soundtracks.

Watch the Filth trailer below, though be advised: it's quite NSFW, so make sure your boss isn't around.

What does everyone think? I haven't read the book, so I couldn't say whether the adaption looks faithful or not, but it does look like a cool movie.

I've not read the book either but from the trailer the film looks to be a british versian of Nick Cage's Bad Lieutenant out a couple of years ago. Looks fun in a bad taste kinda way

I've read it when it first came out, and it looks as devpraved as the book. Not sure if they are going to go the full hog with the twist at the end. Mind you not sure how they deal with the tapeworm bruce gets with grows as the story goes along. In the book it hijacks complete section speaking over bruce and butting him out.

Joshua Chaplinsky from New York is reading a lot more during the quarantine April 11, 2013 - 12:19pm

Been a while since I read the book, but this looks gleefully depraved.

The book is great, although I vividly remember dry heaving while reading a scene that involved flaking, dead skin and a sex act.

I've never read the book, but now I kind of want to.

So I became a huge James McAvoy fan back when I saw Atonement. Then he was in Wanted, which was lots of fun. Then he kind of fell off the radar until X-Men.

I don't know if he's too picky for his own good, or if he's not as good an actor as I think he is. Or maybe he's a total mandiva on set and no one wants to work with him.

Regardless, I can't wait to check out this movie!

both of which are pretty wicked.

McAvoy took a hiatus from film and took some time off and did some stage work, but he's very busy of late.

'Filth' premiered in Scotland this week and will open in London next week. It's been getting ecstatic reviews w/ McAvoy singled out for praise, and it's being called by far the best Welsh adaptation since 'Trainspotting.' Hoping the film will get wide distribution and those of us outside the UK will get to see it. Join us: https://www.facebook.com/filthmovieusa

Watchers of the trailers get quick information about their desired productions that also saves them from waste of time. Students hire helps from www.uk-dissertations.info here for writing of their final research papers.