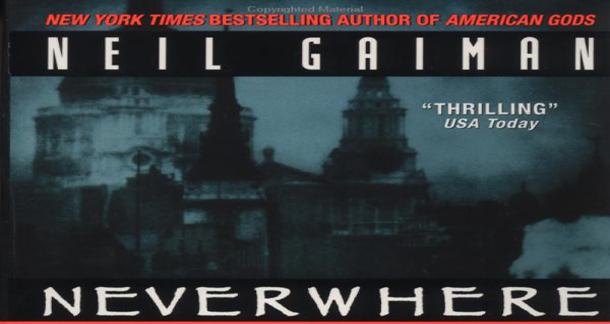 There's a reason I've ended up doing most of the Neil Gaiman articles since I joined up here. It's me. I'm the reason. I'm a superfan and have read pretty much everything the man has published. Neverwhere was how we were introduced, and it was creepy fan-love at first sight.

Some, however, aren't so enamored with his work. Take a mother in New Mexico, for instance, who saw that her tenth-grade daughter was assigned Neverwhere, one of Gaiman's more well-known works, and was none too pleased. She went to the school and complained, and they responded in the way that schools typically do to complaining parents; they removed the book from the curriculum and library shelves. "For review", they insist, but it could lead to an outright ban. The reason?

“I reviewed the language personally. I can see where it could be considered offensive,” said Superintendent George Straface, who is reviewing Wilmott’s complaint. “The F-word is used. There is a description of a sexual encounter that is pretty descriptive, and it’s between a married man and a single woman. Although kids can probably see that on TV anytime they want, we are a public school using taxpayer dollars."

There you have it. The F-word (which is "fuck", in case you were interested) and a sex scene depicting an extramarital affair.

As always, we can get into the argument that the mother is completely naive if she thinks that either of those issues are capable of traumatizing the average 10th grader, or that one parent's complaint is justification for opting that student out of the book, rather than banning it from the school. These arguments have been made and, well, we know how it's gone so far.

What I'm trying to figure out is how Neverwhere, of all of Gaiman's work, was the controversial book. A man gets eaten by a woman's vagina in American Gods. A kid's entire family (including his child sister) is brutally murdered in The Graveyard Book, a book aimed at youth. Some of his short stories are borderline pornographic. But Neverwhere? A funny, enchanting story about magic and the human spirit, one that has been compared to Alice's Adventures in Wonderland? That's the book I have to report is controversial?
Whatever, world. Whatever.

To be fair we don't know if his other books are even in the library to be banned.

What's messed up about this is that she doesn't want other people to read it.  It's good she's paying attention to what her kid does.  But I don't see why see she feels the need to police everybody else.

Some people just have nothing better to do with their time.

I absolutely agree with you Nathan. And you too Larry.

eirikodin from Auburn, NY is reading Mediterranean Caper by Clive Cussler October 16, 2013 - 9:16am

Thanks for clearing up the whole mess with the "F-word" fiasco.  I thought she meant fornicate, another word that should be bleeped out on TV.

And we wonder why we have so many stupid people in the world.  It's because we allow idiots to limit our choices in expanding our minds by doing studpid things like banning books.

I was reading (with my parents' blessing) a lot worse shit than Neverwhere in high school. These kids are a  couple years from legal adulthood, a couple uses of the word "fuck" shouldn't traumatize them, or you probably haven't done your job as a parent.

Also... It's been awhile since I read the book, but I thought he was only engaged, not married? Or am I thinking of Anansi Boys?

@RenneAPickup: I thought the same thing too! I think the main character in Anansi Boys is engaged as well.