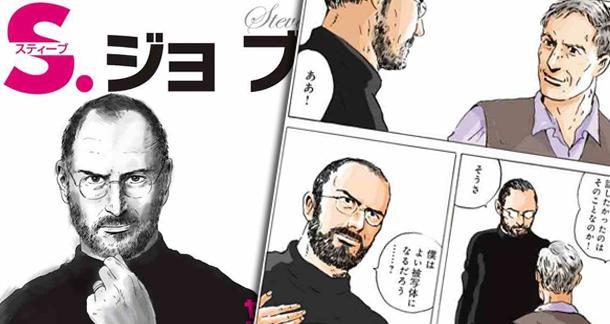 I have to say this isn’t one I thought I’d see — Steve Jobs as a Manga Hero. Walter Isaacson's bestselling biography of Apple’s founder is being turned into a serialised “manga biography” by Mari Yamazki for a Japanese comic anthology (aimed at young women) called Kiss.

It starts with Jobs in his black turtleneck before returning to his early years, drawn in “a semi-realistic monochrome style that is never off-putting, but stays true to the Japanese manga tradition" as described by Tokyo reviewer Sam Byford, for The Verge.

Later, though, Jobs becomes a more classic manga hero, "rendered as a cute, doe-eyed kid who worries about whether his adoptive parents love him", writes Byford, and "once Jobs is of college age, Yamazaki swiftly transforms him into the type of character any teenage reader could fall in love with".

Doe-eyed, huh? Well, I suppose it suits a publication where it’s going to appear with "regular tales of high-school love and drama, and that's the lens through which readers will view it". I guess there are worse things they could have done to him, after all. Now, be honest, doesn’t he look just ever-so-slightly like Jesus?