New Gatsby Film Adaptation to be Scored by Jay-Z 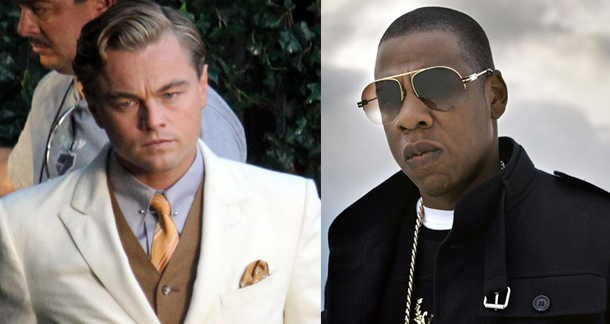 According to The Bullitts’ Jeymes Samuel’s Twitter post, he and superstar rapper Jay-Z will be scoring Baz Luhrmann's The Great Gatsby, starring Leonardo DiCaprio as the eponymous Gatsby.

Jay-Z and myself have been working tirelessly on the score for the upcoming #CLASSIC The Great Gatsby! It is too DOPE for words!

While the use of Jay-Z’s No Church in the Wild in the promo video should have been a clue, cast members let it slip as early as last April that Baz Luhrmann was paying music by the rapper on set. Isla Fischer told MTV:

On my first day he had Jay-Z pumped up full, and we did the entire scene with, you know, Jay-Z in our ear on full blast while acting, and it was just so liberating.

Perfect choice or disaster? We’ll have to see. The movie, also starring Tobey Maguire, Carey Mulligan and Isla Fischer, opens in May. And, judging by this news - and Luhrmann’s previous work - it should be interesting.

I think its a perfect choice. The themes in Jay-Z's music (as well as just overall style) sync so well with Fitzgerald's Jazz Age.

Taylor from Portland, Oregon is reading Blacktop Wasteland by S.A. Cosby January 3, 2013 - 8:34am

Wow...my local news affiliate is just now reporting the same thing! Weird. I really don't get why this is news Portland, Oregon needs to know...I was just waiting for the traffic report.

I vote disaster. While I respect Jay's rise to fame and talent, I am sick of him. My husband has the NBA 2k 13 video game that Jay (or should I say "J-hovah") produced. It's like listening to JayZ stroke himself. Every other song on the soundtrack is his. (It's pretty pompous to start calling yourself "God", so I shouldn't really be surprised.)

I like the Great Gatsby, but I am afraid Hollywood is going to completely bungle it. The Leo DiCap/JayZ combo confirms to me that it's going to be a Hollywood circle jerk. I was so excited about this movie. Now I am sad.

Andrew Riley from Haverhill, MA is reading A Clash of Kings, The Goddess vs. The Alphabet, God is not One, Plato's Secret January 3, 2013 - 10:12am

The problem with Jay-Z is that he doesn't know how to get out of his own way. He puts too much of himself in his work, or rather, he shows too much of himself, so he ends up overshadowing any message he might have. Who knows, he might step aside for Gatsby in order to let some of that talent shine through more so than his bling-plated ego.

As someone who grew up listening to Jay-z as well as other rappers, it is comical to me to see how people react to this news.  I haven't seen it as much on my beloved Litreactor, but on the news sites, people stating that Jay has no musical talent or this will be a disaster.  Much of the hatred of rap music comes from the "mangling of the English language" and that it "appeals to the lowest common denominator." Which is exactly the same thing they said about Shakespeare in his day.  I think that it doesn't matter if it turns out good or bad...its art, and its something unexpected, and new.  They both deserve credit for stepping out of the box and trying something different.  I will withhold judgment until, I see the finished product.

I actually like Jay Z's music, and while I'm not an expert on the subject, what I know of his work is pretty good. You will not hear me say that rap "appeals to the lowest common denominator." I respect the genre immensely.

I just think some artists, when they get so, SO famous, become charicatures of themselves. Mr. 'Hovah, in my opinion, is just the latest to believe his own hype. I'm just tired of the persona. Ditto that for a long, long list of celebs who have moved beyond being famous for the things they produce to being famous for just being. It's hard for me to now separate the man with the ginormous sunglasses from the music  he makes.

My hope is that it is a great movie, but I have my doubts. Maybe I will eat my words. It wouldn't be the first time.

@Taylor I compeletly agree about artist being charicatures of themselves, and I think that happens to anything that gets too popular.  It starts as groundbreaking, then it gets copied and produced for mass consumption, until it is no longer relavant.  I am interested to see how the movie turns out.  The Great Gatsby is on a list of 3 other classic books that I could not make it through in high school (I know,I know..don't judge me. I did get an "A" on the book report though) that being said, does anyone have any suggestions as far as should I read the book, then see the movie or vice versa?

While I think some movie adaptations are good (and sometimes better) renditions of a particular book, I would read Gatsby first. My guess is that Baz will riff a bit on the original (which is totally fine), so it's good to know what he is referring to. Sort of like knowing an inside joke. I read the book in high school & thought it was so-so back then. I had no frame of reference for it, so I didn't get it. Rereading later was a lot better. My guess is that you can enjoy both the movie & the book for different reasons. I vote book first though. :)

Leonardo DiCaprio's a good actor. I can't speak for much of Jay-Z's talent except that this sounds horrible!

It's like saying, "Hey! Wait! Let's do a movie of Sesame St. scored by Cannibal Corpse!" or "Let's replace all the music on MTV's '120 Minutes' with the best opera that's now playing in the world!"

Honestly, if Weird Al Yankovic scored it and played instrumental polka music through the whole movie even that would be more realistic than having Jay-Z score it. This whole thing sounds like a rumor that would have come from Snopes.com .

Anyway, Leonardo DiCaprio was also a good actor in the very horrible and awfully produced (accidentally hilarious, actually) 90's version of "Romeo & Juliet". Sometimes the contemporary treatment can really be a terrible choice.

I hope that on the DVD they would have the option of watching the movie without a lousy rap soundtrack.

If this choice is really true than the producers of this movie have to truly understand that they are complete talentless idiots whose functional ideas have all dried up!

Okay, after watching the trailer, seeing the credits of some of the people who did "Moulin Rouge" (which I didn't like that much), seeing all the self-absorbed bullet-time-like cinematography, seeing how pretentiously self-conscious the acting and cinematography looks, and realizing that I have the choice to see it in the magic of 3D, I've decided to not see this film unless I download it first. I was hoping that the style of the film would not be so self-conscious. :(