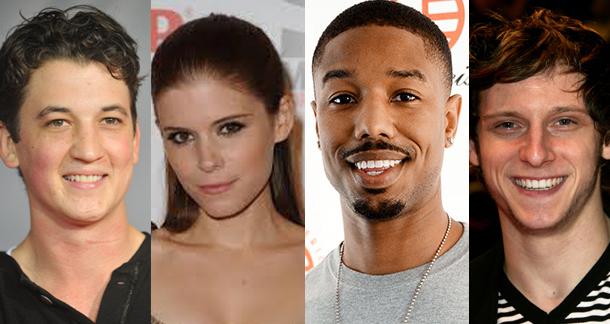 The Fantastic Four is getting a movie reboot with a shiny new cast. And here's the team:

Yup. Johnny Storm, a.k.a. The Human Torch, a white character in the comics, is being played by a black dude.

The Fantastic Four previously appeared in a pair of crappy movies that came out in 2005 and 2007. They also appeared in a 1994 film produced by Roger Corman, though that never got a formal release.

The reboot is scheduled for 2015, under the direction of Josh Trank (Chronicle).

Anyway, in a movie where one guy is on fire, one guy is made out of rock, one guy can stretch his limbs, and a woman can become invisible... I think they'll figure out a way to suspend disbelief on that one. Adoption, probably.

This is something the internet—and the comic book community in particular—generally loses its shit over. But a cursory glance on Twitter (search term: "black Human Torch") shows opinions across the board, and while some people are clearly confused and upset, nothing jumped out at me as completely crazypants.

Honestly, I'm most thrown by the casting of Jamie Bell as The Thing. The first two Fantastic Four movies may not have been perfect—actually, they were really, incredibly bad—but the casting of Michael Chiklis was spot on. END MY OPINION.

Dwayne from Cincinnati, Ohio (suburbs) is reading books that rotate to often to keep this updated February 21, 2014 - 4:54pm

@Brain - Except for David being a troll, I agree.  But it seems to me not sticking to the source material won't lead too (or are signs they'll miss) 2 and 5, which seem to be the movie's goals.

I sort of walked away because I realized I was falling into it with a troll (a first, I swear), but anyway, back to another point.

Yessir, mixed race twins are very real. I had the misfortune of working at a certain TV show that loved paternity tests (hard to guess) and we actually saw those cases quite often. I'd say the majority of the time, at least when I PAed, the parents were both black.

Oh and lookie here: Michael B. Jordan may be eyed for Cyborg?

Where's this coming from? Source?


If anyone should be black in the FF it should be Reed Richards, as another person has already said.

There's also a large amount of material out there written by Dwayne McDuffie (sp?) superheroes like Static, and Icon. I'd be interested in some sort of interpretations of those properties, but I dont think they'd be looked at as "marketable."

dirty little secret is that the sci fi / fantasy/ comic book universe is almost exclusevley white,the few caraters  of any color (human) are kind of sops to avoid the charge of no people of color.

But it is good that one of the charters is identifibly Black, the potential bad is that they will have a universeof white people with one black face, "ala star wars" with no history, no roots, no family,  that has ben saved / adopted by good white folks..

the visual and social language of demeaning Blacks  is sometimes subtle

Well, it's safe to say Mikey won't be doing Cyborg's voice again for awhile. Oh, well. I get why everyone's upset about it but he is a talented actor who has a love for the comic industry, so more power to him being able to diversify a character. Out of the entire cast, he's probably the only one in that lineup that I am pleased to see.

Setting aside my own fanboy peeves about the FOX/Marvel reality schism (They exist outside the unified marvel movieverse, and as such, any canon gripes are futile.)

I do think that placing these stories in an updated 21st century context would warrant some addressing of racial imbalances inherited from the initial chapters of the comics. A world full of mostly white superheroes and main characters might be acceptable to the prevailing culture of a time ruled by segregation, but today alot of us are still in the process of implementing balance and equality, and comics and their film adaptations, as influential as they are amongst younger readers/viewers, need to update their representations of society. Do such recasts/revisions sometimes just come across as flippant/random? sure, I read the FF as a kid and will always have the image in my mind of blonde, blue-eyed Johnny and Sue, clearly sharing parental DNA. Sticking in one black character in a safe spot for brownie points

can come off as superficial (Why not make Reed black, or an asian/latin american Ben Grimm?What about the Avengers? Tony, anyone?A black soldier in WW2 turned into a super-soldier?). I loved Idris Elba as Heimdall, that caused a huge outrage with fans, though one should expect an entire world of advanced humanoids to display alot more diversity (These ain't actually viking gods after all, they're aliens).

Is it really that much of an offense to your fandom if that were suddenly changed to a  multiracial, adoption/new marriage-based sibling relationship? well, we are entitled to our own views, but my answer is, No. This is a Reboot, it has no desire to affiliate with the consensus of the Marvel cinematic universe, and in today's day and age, It's okay for the Storm siblings to be of different ethnic backgrounds, so long as they grew up into the relationship that fulfills the story.

Sure they look mighty young for astronauts involved in such a high profile scientific endeavour.

Sure, Where's the hulking macho but gentle-giant brother Ben Grimm we all know and love?

Pshhhh, whatever. Guardians and Age of Ultron are gonna rock, these are all commercial properties at the end of the day and are bought, sold and remarketed/resold as such.

Excuse my verbose rant, here in South Africa, race is something close to the surface that has to be negotiated on a daily basis, and globally, it's still something that we're coming to terms with as human beings.

Dwayne from Cincinnati, Ohio (suburbs) is reading books that rotate to often to keep this updated February 25, 2014 - 10:38am

Are you a fan?

Casual fan. His catalogue is pretty diverse, some is excellent.

Dwayne from Cincinnati, Ohio (suburbs) is reading books that rotate to often to keep this updated February 26, 2014 - 4:23am

Kind of how I feel, although Victor Von (not how he spells it) is the coolest rap name ever.

Now I need to go listen to MadVillain. This article has fulfilled a higher purpose than it had intended.

Community Manager
helpfulsnowman from Colorado is reading But What If We're Wrong? by Chuck Klosterman July 25, 2018 - 4:42pm

I'm SO late to this game. But you're dead on, Jamie Bell as Ben Grimm? The pride of Yancey Street? Aunt Petunia's Favorite Nephew? No way.