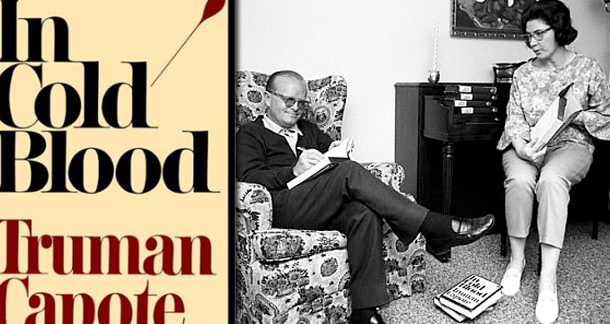 In Cold Blood. You’ve probably seen the movie, even if you haven’t read Truman Capote’s true crime book about the murder of a farmer and his family in Holcomb, Kansas. The deaths of the Clutter family made national headlines, including the New York Times article which inspired Capote to write the book. His fascination with the story even caused him to travel to Holcomb with his close friend, Harper Lee of To Kill a Mockingbird fame, to visit the scene of the killings.

Over the next two years, he became closely acquainted with all the people involved with the case, but took no notes during interviews, instead writing down quotes immediately afterward, claiming his memory retention was over 90%. It appears now that while his memory may have been accurate, what he wrote may not have been.

The Kansas Bureau of Investigation has consistently supported the accuracy of the book, but case files found at KBI indicate the author “massaged the facts in at least two chapters”, probably to cast Alvin Dewey in a better light. The academics and critics are going to have a field day as they’ve been picking the book apart almost since its publication in 1966.

Notably, they suggest that Capote was incorrect when he said that Mr Dewey and his team responded instantly when, after 14 days of stumbling in the dark, they received a tip-off that two drifters, Richard Hickock and Perry Smith, were responsible. The men were eventually convicted and executed. The book says an agent was dispatched immediately to investigate. The papers say Mr Dewey dithered for five days.

Capote and Dewey’s relationship doesn’t appear to be altogether Kosher, either, as the author was given access to all the case files for a week and exclusive interviews with the killers in the run up to their trials and execution. And Capote repaid him by making him a hero. He even got Dewey’s wife hired as a consultant during the filming of the first In Cold Blood movie.

It looks like Capote, like a lot of authors, wasn’t one to let the facts get in the way of a good story. Which raises the question: how far would you go to tell a good story?

That's it?  Well, I guess from a historical standpoint it's important to get all the facts on record, but it seems rather lame to me.  I didn't take the book to be gospel truth in the first place.  If the facts regarding who did what to whom are correct, who cares at this late stage if the author bent minor details to improve the story?  I always thought the bit about the "Spanish rice" and the friendly squirrel were a bit silly.  It almost seemed like Capote was trying to create sympathy for one of the killers -- I forget which.

But what the heck. It was a different time in America.  The murders were shocking on multiple levels back then.  These days?  Worse happens daily and nobody cares.

In Cold Blood is a book wherein the author describes the thoughts of a character whose real-life counterpart's death had prompted the writing of said book.

In other words, it's not so factual.

Professors really hammer in the point that Capote wrote during a time when the rules for creative nonfiction were much less strict than now. If he wrote it today, he'd have to cite everything. The whole "writing from memory" thing wouldn't fly.

Precise facts aside, I remember this book as a cracking read. Recommended.

This is one of the very few classics I absolutely hated. I found his incessant condescension toward his subjects (especially the murdered family) really off-putting at the time. I'd be hard pushed to be more specific than that, nowadays.

I loved his first novel. Other Places, Other Rooms. One of my favorites for years.