News by Christopher Shultz September 5, 2013
In: 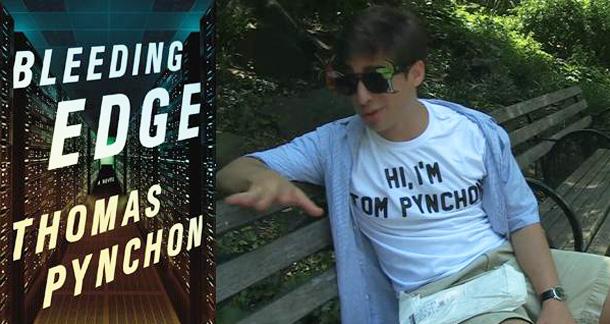 It is 2001 in New York City, in the lull between the collapse of the dot-com boom and the terrible events of September 11th. Silicon Alley is a ghost town, Web 1.0 is having adolescent angst, Google has yet to IPO, Microsoft is still considered the Evil Empire. There may not be quite as much money around as there was at the height of the tech bubble, but there’s no shortage of swindlers looking to grab a piece of what’s left…

So this trailer has absolutely nothing to do with that synopsis. Instead, it gives us an interview with a rather strange fellow named Sleazus. He's "an upper West Side Macher." He's like "Karl Rove...if Karl Rove were liberal. And Jewish." He wears goofy sunglasses and a T-shirt that says "Hi, I'm Tom Pynchon." It's pretty awesome. Check it out:

Note too that Sleazus mentions Maxine Tarnow, which we know from this excerpt to be a character from Bleeding Edge, so the trailer's not totally random. And maybe (hopefully) Sleazus is a character too.

What do you guys think? Is this the greatest book trailer ever?