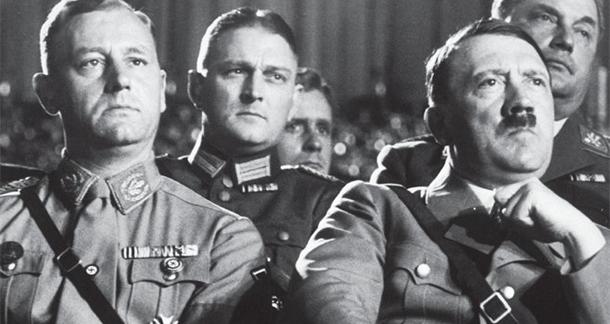 photo from the cover of The Collaboration

It may be hard to swallow, given all the anti-Nazi propaganda films produced by studios during World War II, but before the bombing of Pearl Harbor and U.S. involvement in the fight, Hitler had Hollywood tucked firmly in his pocket.

The Hollywood Reporter published an extensive sneak peak at a new book by Harvard post-doctoral fellow Ben Urwand. Titled The Collaboration: Hollywood's Pact with Hitler, it presents mounds of archival documents detailing the collusion between the Nazi regime and Hollywood producers during the 1930s. Why was such a collaboration forged? Well:

The Nazis threatened to exclude American movies -- more than 250 played in Germany after Hitler took power in 1933 -- unless the studios cooperated. Before World War I, the German market had been the world's second largest, and even though it had shrunk during the Great Depression, the studios believed it would bounce back and worried that if they left, they would never be able to return.

The extent to which Hollywood bowed to Nazi influence is staggering. Dig this:

Beginning with wholesale changes made to Universal's 1930 release All Quiet on the Western Front, Hollywood regularly ran scripts and finished movies by German officials for approval. When they objected to scenes or dialogue they thought made Germany look bad, criticized the Nazis or dwelled on the mistreatment of Jews, the studios would accommodate them -- and make cuts in the American versions as well as those shown elsewhere in the world.

It was not only scenes: Nazi pressure managed to kill whole projects critical of the rise of Adolf Hitler. Indeed, Hollywood would not make an important anti-Nazi film until 1940.

According to The Huffington Post, Urwand's is not the first book to deal with this subject. Back in April, Columbia University press published Thomas Doherty's Hollywood and Hitler, 1933-1939.

Head over to The Hollywood Reporter for photos, videos, and samples from Urwand's book.

Is it surprising that Hollywood and Hitler were so chummy?