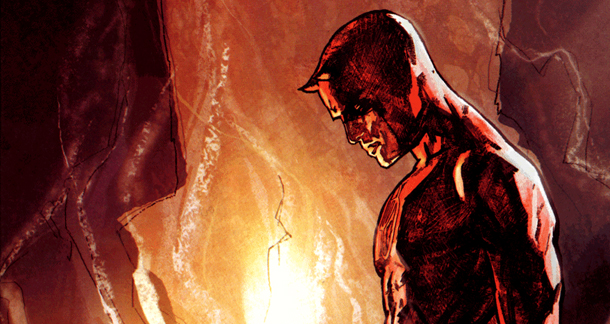 Marvel is just moving from strength to strength in its move to take over the world. Marvel TV has just signed a deal with  Netflix and Disney to produce four new series based on the comics Daredevil, Jessica Jones, Iron Fist and Luke Cage. They’re also going to produce an “Avengers-like” crossover called The Defenders. That’s FIVE new series based on Marvel comics.

'This deal is unparalleled in its scope and size, and reinforces our commitment to deliver Marvel’s brand, content and characters across all platforms of storytelling. Netflix offers an incredible platform for the kind of rich storytelling that is Marvel’s specialty,' said Alan Fine, President of Marvel Entertainment. 'This serialized epic expands the narrative possibilities of on-demand television and gives fans the flexibility to immerse themselves how and when they want in what’s sure to be a thrilling and engaging adventure.'

They’ve committed to 13 episodes of each, starting with the ever-popular Daredevil (my favorite), all destined for your viewing pleasure in 2015. C’mon, it’s not that far away — we’re almost in 2014.

As online viewing becomes more prevalent, it’s hardly a surprise: Kevin Spacey’s recent series for Netflix, House of Cards, is only the beginning. If you’ve been following developments and the anti-network rhetoric starting to appear, you'll know we’re going to see more deals like this. (How many good series have we lost because of nervousness or paranoia about ratings? Firefly, anyone?).

I guess it’s also no surprise Netflix is doing this, as they signed a deal with Disney last year to be “the exclusive U.S. Subscription service for first-run, live-action and animated movies from the Walt Disney Studios” from 2016.  I’ll be tuning in. Oh, I guess I’ll have to sign up to Netflix after all. Do you think this is a good move for Marvel? I think it is and I can’t wait to see what happens next!

Very excited about Daredevil. One of my favorite characters.

I've been saying Daredevil should be a tv series for awhile and I'll take a Luke Cage tv or movie. Very excited.

Dwayne from Cincinnati, Ohio (suburbs) is reading books that rotate to often to keep this updated November 10, 2013 - 6:26am

Are you guys sure it is five? Because "Luke Cage and Power Man" used to be one comic, and the Marvel website says that Netflix has committed to four, not five, with a mini series event "The Defenders" as the cumulation.  So I wasn't sure if they were counting the mini series as the forth one. I'm not saying you're wrong, just wasn't sure if you had more details than I did.