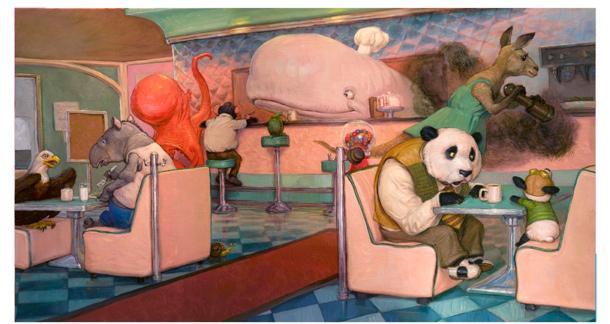 Neil Gaiman never rests or fails to surprise—shifting effortlessly from the darkness of the Sandman and Death series to cutesy-wootsy picture books about a little panda with a giant sneeze (somebody's been watching YouTube viral vids). HarperCollins has announced that the prolific bestselling author has just signed for a series of five children's titles: two picture books and three novels.

Both picture books will focus on Chu the panda, who is straight-up adorable. The first, Chu's Day illustrated by Adam Rex, is available now for presale on Amazon with a release date of January 8, 2013. One of the novels will be a sequel to 2009's Odd And The Frost Giants. Another—a "middle-grade" novel called Fortunately, The Milk—features art by Skottie Young. The third novel is not yet titled but is also for middle grades.

If you're a Gaiman fan, are you excited about this news or disappointed that he's not focusing on more adult material?

As a big fan of Gaiman's work, I'm excited to see ANYTHING new from him.  I adore his children's books and his adult works pretty much equally-- if anything, I have even more fondness for his children and young adult stories.  The Graveyard Book and Coraline are definite favorites.

I love it. I am 33 and as big a fan of Interworld and The Graveyard Book as I am of the Sandman series and American Gods. Neil has the rare gift of being able to transition effortlessly between audiences and genres, and he has enough clout to write what he wants- good for him!

As a big fan of Norse legends- I've incorporated a great deal of them into my own writing- I am also pleased to see that there will be a follow-up to Odd and the Frost Giants.

The Graveyard Book made my eyes water. I love Gaiman.

I don't really consider The Graveyard Book or Coraline to be "children's" literature. I haven't read Odd and the Frost Giants, so I can't comment on that... but these seem to be much more kiddy in general. I'll reserve judgment, but the news doesn't excite me. Always interesting to see what he does, regardless, but I wouldn't mind a new adult novel at some point soon.

From my understanding he has just finished a draft of a novel and is reading it chapter by chapter to his wife. So expect one soon, hopefully.

I'm stoked! I'll get to share Gaiman with my daughter throughout her life!

The Day I Swapped My Dad For Two Goldfish is a favourite.
And it's well known Neil's working on American Gods 2, so he's keeping me happy on every front.

Neil Gaiman's never one to disappoint.

Do I want to see more Gaiman works that I'll actually want to read? Absolutely. Am I disappointed that these particular works don't appeal to me? Not really.

I like a man who stays busy, and Neil certainly does that. His is the kind of restless, reckless creativity a lot of authors should envy.

I felt like putting a bullet between the eyes of every panda that wouldn't screw to save its species.

Also, who do these pandas think they are, anyway? Trying to be black and white. Someone should tell them that's not how the world works.

As long as American Gods 2 comes out, I'm happy.  His 'children's books' are great, his comics are great (anyone read 1602?  That was a really good Neil-version of the Marvel universe - no Sandman, but still great), his novels are great, his poetry is great, his short stories are great.

I love you, Neil.

He's definitely awesome. I don't really care what he does... not like I don't have things to read. When he gets around to giving us stuff, I'll be waiting.

And yeah Limbless, I seem to remember him tweeting about novel work, so did figure he had an mss in the pipeline somewhere.

For those disappointed by this news:

According to his blog he is also working on the second draft of an as-yet-unnamed adult novel, and if anyone missed yesterday's CC announcement, Mr. Gaiman is expanding the "Sandman" universe: