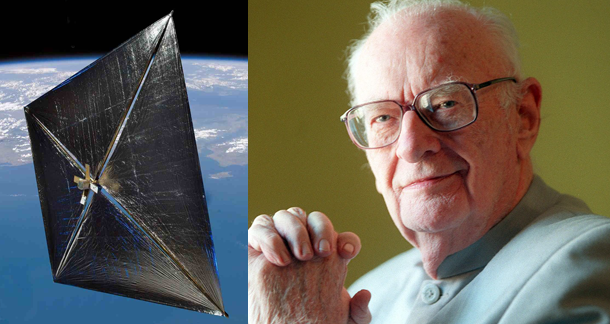 A lot of us dream of going into space, one way or another, mostly disregarding the issues of fitness and health. Hunter S Thompson was shot into the atmosphere from a cannon by Johnny Depp and apparently Iain Banks wants to be fired in a rocket over the Forth (the large inlet to the north of Edinburgh, Scotland). But Arthur C. Clarke is going one better — and further — his DNA is being launched into space next year on Nasa’s first solar sail mission.

He was first approached by Charles Chafer, chief executive of Space Services Holdings (who had met Clarke at the UN conference in Vienna on outer space in 1982) in 2000 when the company was thinking about a solar sail craft.

"I was/am a lifelong fan and attribute much of my interest in space to the movie 2001: A Space Odyssey," said Chafer. "In 2000, when we were first planning a solar sail mission to deep space we approached him about donating a hair sample containing his DNA for launch. A partner at the time journeyed to Sri Lanka to his home where he obtained the sample."

The solar sail craft will be named “the Sunjammer” in honor of a story Clarke wrote in 1964 about a race in space using solar sails. The first mission is a test flight and will deploy a “sail” of reflective material that will be approximately 13,000 square feet—around 124 feet on a side, but extremely lightweight. Collapsed, it will be about the size of dishwasher and weigh only 70 pounds.

Clarke’s sense of humor showed through in a note he wrote to accompany his hair sample: “Here are a few strands, I would give you more but I don't have any to spare."

According to the Guardian article, cremated remains of your loved ones could be included for around £8,000 (or around $12,000), but frankly that’s not the way I intended to get into space. What about you?

Dwayne from Cincinnati, Ohio (suburbs) is reading books that rotate to often to keep this updated June 29, 2013 - 1:10am

When the army of Clarke clones comes, I hope the films about the war are better then the Star Wars II Attack of the Clones.