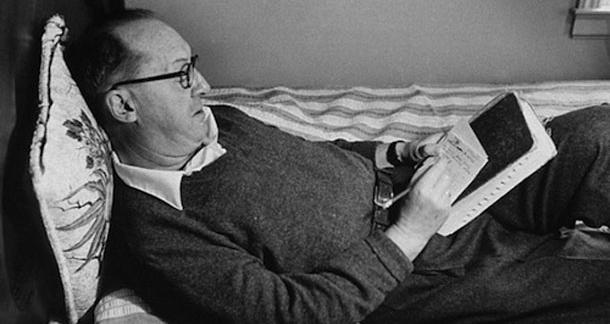 The Times Literary Supplement has uncovered a rare short story by Vladimir Nabokov, titled "Breitensträter – Paolino." It had never been published in English--until now!

Nabokov was born in Russia, and was raised speaking and writing both English and Russian. Lolita was written in English, and later translated into Russian by Nabokov. The translation for this story story was handled by Thomas Karshan and Anastasia Tolstoy, Leo Tolstoy's great-great-great granddaughter.

According to the Times Literary Supplement:

Of all the sports Nabokov could have chosen to focus on, he took in boxing the one that concentrates as no other the pain and violence he always saw in play. But “Breitensträter–Paolino” is a very literary and verbal account of boxing – the author’s red ink seeping across a skein of metaphor into the blood on the referee’s vest – and is punctuated according to the varying rhythms and geometries of the sport: its quick flurries, its wary circlings, its dueling antitheses.

This isn't the first look at posthumous work from Nabokov--in 2009, an incomplete work, The Original of Laura, was published despite Nabokov's request that it be burned.

Class Director
Rob from New York City is reading at a fast enough pace it would be cumbersome to update this August 2, 2012 - 6:38pm

Unless I'm missing something, this is not a "Short Story" as we commonly define the term, meaning a work of short fiction.

It's a lecture or "talk" he gave to his literary circle (where he often read fiction, poetry and drama) on the topic of boxing, where he discusses our desire to play games, the merits of boxing, and then briefly recounts a heavyweight bout he attended between Breitenstrater and Paolino.

Class Director
Rob from New York City is reading at a fast enough pace it would be cumbersome to update this August 2, 2012 - 8:40pm

I'll respond when I finish rolling my eyes.

No need.  It's been an odd communication, but I've at least gained the sense that I'm not wanted here, so will leave you to it.