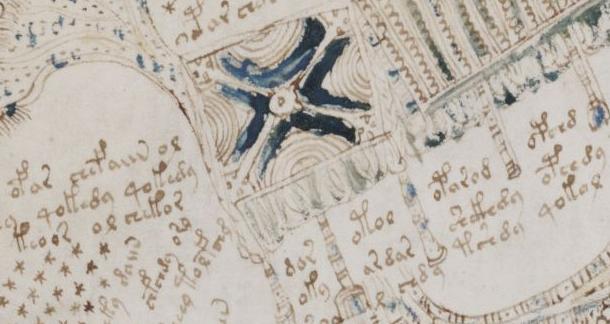 The Voynich Manuscript, a mysterious book that's undated and written in an unknown language, is now available online in its entirety, thanks to the Yale University Beinecke Rare Book and Manuscript Library. Click here to be baffled!

Here's some more about the book, from the university website:

Written in Central Europe at the end of the 15th or during the 16th century, the origin, language, and date of the Voynich Manuscript—named after the Polish-American antiquarian bookseller, Wilfrid M. Voynich, who acquired it in 1912—are still being debated as vigorously as its puzzling drawings and undeciphered text. Described as a magical or scientific text, nearly every page contains botanical, figurative, and scientific drawings of a provincial but lively character, drawn in ink with vibrant washes in various shades of green, brown, yellow, blue, and red.

The Voynich Manuscript is fascinating. Despite the fact that the language in which it's written is unknown, the layout and consistency of the text suggests that, yes, it is a language of some sort. But according to Cracked (which is where I first read about this, and no I'm not ashamed of that), "military code-breakers, cryptographers, mathematicians, linguists, people who get paid to find and decipher patterns, have all been left unable to decipher a single word."

But now that it's available to a wider audience, who knows? Earlier this year we learned that video gamers solved a molecular puzzle that had previously stumped scientists. This is why crowd sourcing is a good thing.

Very good episode of the Skeptoid podcast about it. Well worth the 12 minute listen. http://skeptoid.com/episodes/4252

Joshua Chaplinsky from New York is reading a lot more during the quarantine November 29, 2011 - 8:34pm

I expect LitReactors to have this cracked by the weekend.

Class Director
Rob from New York City is reading at a fast enough pace it would be cumbersome to update this November 29, 2011 - 9:26pm

What do you think I've been working on all night?!?

If I'm going to do this I need more whisky, and possibly drugs.

Since it's for LitReactor, I can write them off on my taxes, right?

Clayton Blue from Arizona is reading Middlesex by Jeffrey Eugenides November 30, 2011 - 12:00am

I think it's a hoax. A clever hoax.

It's an ancient recipe for all-natural male enhancement.