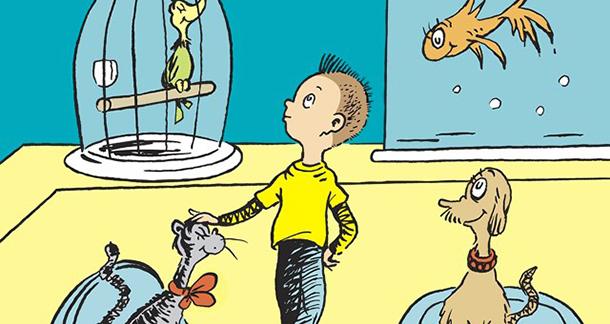 It looks like this is the week of found manuscripts! What Pet Should I Get, a story written by Seuss and discovered by his widow and secretary over a decade later, will be published this July. Sir Arthur Conan Doyle’s charitable work, "The Book o’ the Brig," was found by an 80-year-old historian, Walter Eliot, and is available to read online.

“While undeniably special, it is not surprising to me that we found this because Ted always worked on multiple projects and started new things all the time—he was constantly writing and drawing and coming up with ideas for new stories,” Audrey Geisel, Dr. Seuss’s widow, told PRNewswire after finding the late children’s author’s lost manuscript. “It is especially heartwarming for me as this last year also marks twenty-five years since the publication of the last book of Ted’s career, Oh, the Places You’ll Go!”

Geisel and Claudia Prescott—Seuss’s secretary—uncovered What Pet Should I Get while cleaning out Seuss’s La Jolla, California home. The narrative and illustrations for the book are nearly complete and will be published by Random House. Seuss’s former Art Director also made a statement to PRNewswire, announcing that the found manuscript was probably penned between 1958 and 1962.

As for Sir Arthur Conan Doyle’s story featuring the infamous Sherlock Holmes, Eliot discovered the 1,300-word pamphlet style work in his attic, reports The Telegraph. The charitable story was supposedly written to save the author’s favorite bridge in Selkirk, and features Holmes using his deductive skills to uncover Watson’s trip to Selkirk. This is the first Holmes story by Doyle to be found since the publication of the last, over 80 years prior.

Is anyone out there as excited as I am to read these two uncovered manuscripts? What other authors do you wish would publish a book from beyond the grave?

Hello everyone we here and today we try to play a new mode game free euchre online euchre is totally free,no sign up required.