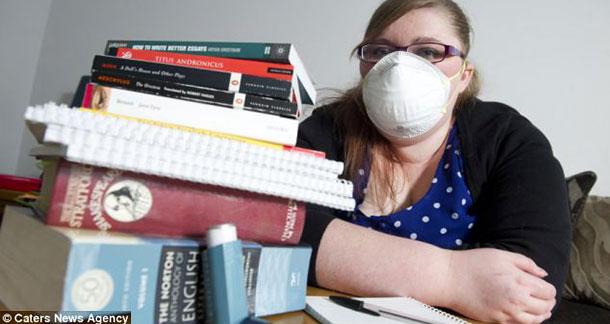 I know we have some teachers and professors out there in the LitReactor community, and you're probably more than familiar with the excuses students will give to get out of class. Food poisoning is probably popular, as is having someone's grandmother die a few times a semester. But what would you think if a student told you that the assigned reading would literally kill her?

That's the case with Kirsty Ashman, a woman who once aspired to be an English teacher, only to be blocked by a potentially-fatal allergy to dust. That's dust in the lecture hall, dust outside, and yes, dust from ancient tomes of forbidden knowledge (and textbooks). Essentially, she has to avoid every single book as if it were the Necronomicon itself.

Despite these limitations, she gave university the old college try, and ended up in the hospital fifteen times over the course of two years.

She said: ‘It’s really hard, I have to battle so much just to achieve normal things.'

‘One day I was studying, I’d got my friends to get the books off the shelves in the library as that is normally a danger area for me.'

‘As I got the book out of my bag and opened it, it must have wafted a cloud of dust into my face because I felt my airways closing and was struggling to breathe.'

‘It was a terrible reaction and I ended up back in hospital.’

She decided that the English teacher job wasn't going to work out, considering the number of books most English teachers have to be around, so she's now studying medical sciences via online courses from her home. Really, it doesn't surprise me that the girl who fought death itself for the ability to read books is now tackling the only barely lesser challenge of medicine.

Remember that the next time you feel like taking a week off of writing because you have a little headache.

I'm feeling really bad for her, but she is lucky that we are living in era of internet and distance learning is possible. In fact, many people prefer online education to earn degree, in order to have more time for work and build your career. Besides, there are so many guidelines on the internet, you can read  anlearn about essay writing process totally by yourself, simply by following basic guidelines.