Mermaids Are the New Vampires – for Girls and Women 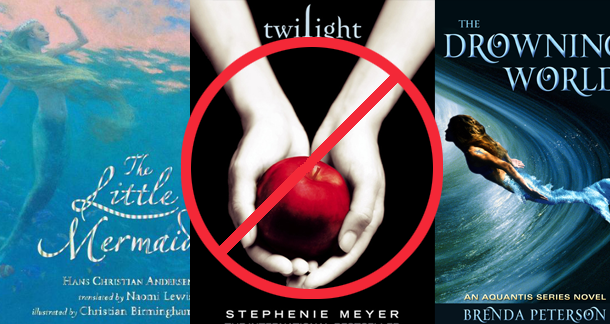 Sick of vampires? Been Twilighted beyond sense? Well, it looks like blood suckers are passé for a lot of female readers — they’ve been replaced by, of all things, mermaids!

According a couple of recent articles (and a mockumentary on Animal Planet, no less) we're seeing a new fascination with the legendary maids of the sea, particularly amongst women and YA fiction. Hell, according to an interview with USA Today last year, even Twilight supremo Stephenie Meyer is writing a book about ‘em.

According to Brenda Peterson, author of The Drowning World series, she doesn’t really understand the fascination with all that blood and “why a woman would want her life's blood drained away to spend her eternal life with a dead man”.

Mermaids practice more feminine power than most vampires. Like many female wild animals, mermaids choose their own mates. So mermaids are action heroes in their own rights; they are not just acted upon by dashing male vampires who recreate women in their undead image… Unlike the tragic, self-destructive Little Mermaid of Hans Christian Anderson's classic tale, our 21st century mermaids can live between sea and earth with style and pleasure. And unlike the vampire stories in which death or war are the main themes, mermaid myths focus most on romance and struggling to fit in – or not. For girls and women, adapting to our ever-changing roles and societal expectations, our focus on relationships is like shape-shifting. We are always in moral and romantic dilemmas, such as: How much do we change ourselves to be loved? In a global village, can we love The Other/The Outsider/The Forbidden?

And a quick search for ‘mermaids’ on Amazon brought up thousands of books about the mystical creatures — admittedly, for all ages, although there were hundreds listed in Romance and Teens, so it’s hard to dispute the fact.

So, are mermaids the NEXT BIG THING? I’d bet a lot of traditional publishers think so. We’re more than likely to see a number of new releases in the coming months based on the legends. Wanna bet what the next Twilight series is?

Carly Berg from USA is reading Story Prompts That Work by Carly Berg is now available at Amazon January 25, 2013 - 9:14am

Thanks, perfect timing. I'm going to write a mermaid/siren flash story for a study group assignment here, but I am not real familiar with them. So the links are especially appreciated. I didn't realize they were having an upsurge in popularity. Nice to see what others are doing with them.

The question is are any of them good or all they all Twilight-like stories about girls whose lives are made to do nothing but swoon? As a girl whose childhood neighbor was the ocean, mermaids were the epitome of fantansy--something graceful and beautiful that could live with the chaos and power of the ocean. They are the anti-vampire in a little girl's mind. I would really like someone to write a good one (or three?) that explores the myth and expands on it in a modern, badass ladylike way.

Ghostword from Cornwall is reading The Land of Laughs by Jonathan Carroll January 25, 2013 - 9:45am

Theres nothin' like finding a sweaty, grey, blubber skinned mermaid in yer bed naked and clutching herself with the mechanical hands attatched to her fins. Except of course when you realize shes lying in front of a large sac of eggs just waiting to be fertilized. So Hawt.

Carly Berg from USA is reading Story Prompts That Work by Carly Berg is now available at Amazon January 25, 2013 - 1:45pm

Dwayne from Cincinnati, Ohio (suburbs) is reading books that rotate to often to keep this updated January 28, 2013 - 3:07pm

Well bestiality is better than bestiality with necrophilia combo. I guess.

Joshua Chaplinsky from New York is reading a lot more during the quarantine January 28, 2013 - 10:57am

This song's about mermaid murder. It's called, "Murmaider."

Dwayne from Cincinnati, Ohio (suburbs) is reading books that rotate to often to keep this updated January 28, 2013 - 3:09pm