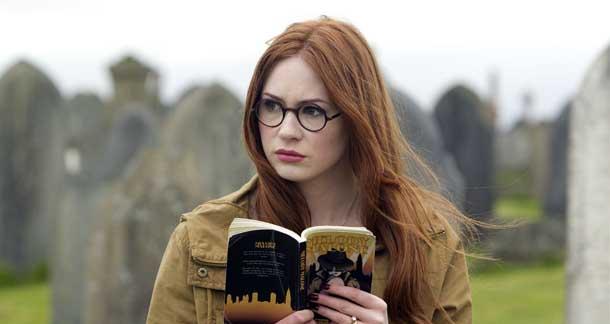 The latest episode of Doctor Who revolves around a detective novel, The Angel's Kiss, written by Melody Malone, who is actually River Song, who is the grown-up brainwashed assassin daughter of Amelia and Rory Pond, the companions to The Doctor, who must travel to the past to prevent living statues called The Weeping Angels from feeding off the time energy of innocent New Yorkers.

If you've seen the show that'll make sense. And if not... sorry?

Seriously, the novel was a cool storytelling device and it was a very sad episode as it was the last for The Doctor's companions, Amy and Rory (and that's not a spoiler, it was hyped for months). It was also the mid-season break for the series, which picks up again with the Christmas special on December 25. So to fill the Who-shaped hole in your heart until then, there's this eBook.

Although it has the same cover and some of the same prose as the book the Doctor and Amy read, this isn't the same future telling novel. Rather than a full novel in which Rory, Amy, and the Doctor show up halfway through, The Angel's Kiss is a short story starring River as the wry detective named Melody Malone.

What do you think? Cool little piece of memorabilia? Did you see The Angels Take Manhattan? Are you done crying yet, over how sad it was? Are you a non-Whovian and completely confused by all of this?

Tex Gresham: "This Is My Submission To The Post-Modern Library"

When I worked at Borders I flipped through the Doctor Who novels and they never did anything for me. This seems a bit different than those, so maybe I'd check it out. I haven't seen the episode yet--maybe it will grab me.