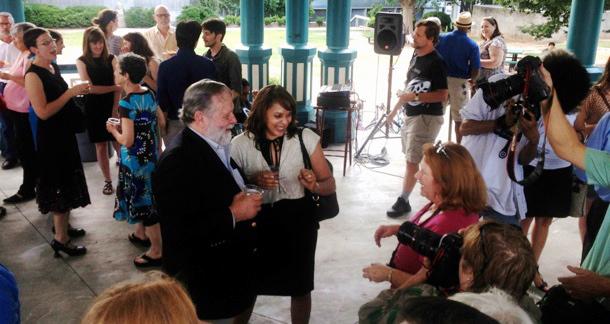 Pulitzer Prize-winning poet Natasha Trethewey was named the nineteenth Poet Laureate of the U.S. yesterday, so LitReactor sent a member of its Georgia news bureau to cover the reception that her hometown held in her honor.

Okay, so there is no "Georgia news bureau," but it sounds more impressive than: I got out of my pajamas and walked four blocks from my house to knock back free champagne and high-five the new national poet in a gazebo. Oh, and then chatted with her about how many times she told her dog about the position since she found out about it on May 9 because she wasn't allowed to tell any actual humans other than her husband.

At yesterday's reception in Decatur, Georgia, Mayor Bill Floyd called the Emory University creative writing professor "our rock star." Meanwhile, a keg hose went rogue and doused Atlanta's literati with Hopsecutioner beer. Things looked to be getting rowdy but reason, unfortunately, prevailed. Later, Trethewey—who wrote her first poem on a dare "to prove I couldn't do it"—made a weepy but adorable 60-second speech while clutching flowers like a pageant queen, finishing with "I guess I'm the U.S. Poet Laureate, but I really hope that I'm your Poet Laureate too." I wanted to pinch her cheeks, but I didn't because that's just weird.

Trethewey is breaking the standard Poet Laureate mold simply by failing to be an octogenarian male. At 46, she is one of the youngest Poet Laureates ever appointed and the first Southerner since the position was renamed Poet Laureate Consultant in Poetry in 1985. She'll also be the first to actually take up residence in Washington to work directly in the Library Of Congress Poetry Room, which I can only assume is fragrant with old-book smell and also filled with butterflies. She'll be paid a $35,000 stipend for the position.

Trethewey began writing poetry regularly during her freshman year in college to deal with the tragic death of her mother, who was murdered by Trethewey's stepfather. She explained, "[Poetry] seemed like the only thing that can speak the unspeakable." She attended yesterday's event with her father, Eric (pictured with her above), who is also a poet and professor.

I enjoy poetry a lot when I do read it, but can't honestly say that I spend a lot of time with it. Maybe I should change that. I'm curious about how many of you regularly read poetry. Speak up if you do. If you're like me and don't, why not? Does it not appeal to you or is it just something that you enjoy but don't think to pick up very often?

I don't read poetry that often. I'm a big fan of Howl and Terrance Hayes—and translated Homer, I guess—but I don't feel I have a good grasp of it, honestly.

I read a lot of poetry--always have. It's what I started writing when I began writing a long time ago. I subscribe to the Academy of American Poets Poem-A-Day, which means I get a poem in my inbox daily. It's a great way to find out about new poets and read old favorites.

JEFFREY GRANT BARR from Central OR is reading Nothing but fucking Shakespeare, for the rest of my life June 8, 2012 - 7:47pm

She was on Fresh Air this morning. Lovely story (depending on your definition of lovely), lovely person, and lovely poimes.

I rarely read poetry, unless I am trying to spark other ideas, then I read it a lot. I enjoy it, I just don't seek it out.