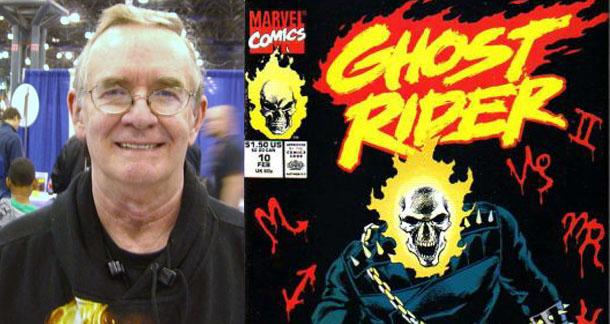 In the 1970s, Gary Friedrich created the character of Ghost Rider for Marvel Comics. You've seen the guy: Leather jacket, flaming skull for a head, currently being butchered on film by Nicolas Cage (Ghost Rider, not Friedrich).

Friedrich doesn't own the rights to Ghost Rider--Marvel does. When the first Ghost Rider movie came out, Friedrich sued Marvel, arguing that while they owned comic book rights to the character, he owned the film rights. A judge disagreed and he lost the suit.

Now, Marvel is suing the 68-year-old Friedrich for $17,000, or the sum of money he's earned in retirement by attending conventions as a paid guest.

Seriously? Was the $4 billion Disney paid for Marvel not enough?

It's hard to perceive Marvel as being anything other than a bunch of bullies. Friedrich isn't out creating his own comics and films using their intellectual property. He's just taking credit for something he did--doesn't matter who owns the character, Friedrich is still the creator--and to say that him getting an attendance fee is tantamount to, what, copyright infringement? Seems a little Grinch-like.

'Tis the sad state of the comic book world: The biggest characters in comics are earning money for the companies where they live, while the people who created the characters get nothing. Did you know Jerry Siegel and Joe Shuster only got $130 for Superman, a character that's minted money for DC Comics? (Well, before years of legal wrangling, of course).

Dwayne from Cincinnati, Ohio (suburbs) is reading books that rotate to often to keep this updated February 10, 2012 - 12:08pm

Not the best way to attract new talent.

Definitely, when they can't treat their main creators with respect, why work for them?

I only collect Spawn comics anyway though, f*ck Marvel.

Todd MacFarlane hasn't lived up to his reputation as champion for the indies either.

But screwing creators has been a strategy forever. Nicola Tesla for example.

Dwayne from Cincinnati, Ohio (suburbs) is reading books that rotate to often to keep this updated February 10, 2012 - 12:27pm

This same circumstance exists all across the entertainment industry.

Within the game industry, in particular, IP ownership for a development studio is very, very rare. Most everything is owned by the big ones; Sony, Nintendo, Microsoft, 2K. Hell, a lot of times if you don't make a game, but are paid for preliminary R&D, the contracts are written such that the undeveloped idea can be brought to other teams to make if the publisher doesn't like what it sees, but likes the idea. It would be like someone pitching Batman to DC, and then DC turning around and giving Batman to another creator to develop.

Typically, the people who pay for the stuff to get printed / developed are the ones seeing benefits. Sucks, and this seems particularly underhanded by Marvel.

Craig Bertuglia from Houston (but I grew up in South Jersey) is reading "The Priest" by Gerard O'Donovan February 11, 2012 - 5:58am

There are a few comic publishers out there (Boom, Dynamite, some of the smaller indies) that are decent to creators in terms of rights and licensing, but most are draconian.  Case in point: Alan Moore may rage all he wants about the upcoming Watchmen prequels, but there is not a single legal thing he can do about them nor shall he make a RED CENT from them.  It bears repeating in every one of these comments, WHENEVER you sign a writing contract, make sure your voice is heard about which rights you wish to retain.

Hold on a sec, everyone. This story might not be all that it's cracked up to be.