Man Turns His Manila Home Into A 24/7, Rules-Free Community Library 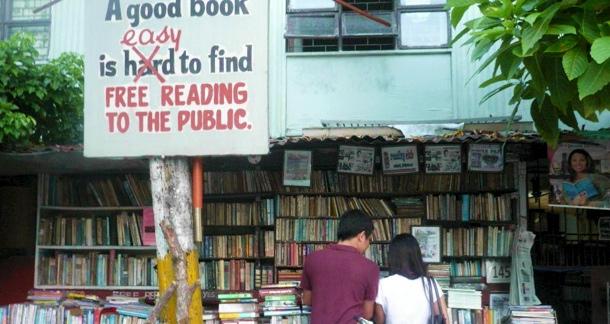 In 2000, Hernando Guanlao (aka Nanie) founded Reading Club 2000 by setting up four wooden bookshelves outside his house in the Philippine capital of Manila. He stocked the shelves with about 100 books and put up a sign indicating that passersby should grab a book to read. Twelve years later, the outside of his home has transformed into a full-fledged community library with thousands of books donated by his neighbors.

The unofficial library on Balagtas Street has no due dates, no limit on the number of books one person can take, no system to track who has checked out a book...in short, no rules. Yet instead of shrinking, Nanie's collection continues to grow year by year. The sixty-something-year-old proprietor told the BBC, "You don't do justice to these books if you put them in a cabinet or a box. A book should be used and reused. It has life, it has a message."

While the Philippines has one of the highest literacy rates in the developing world (about 93%), books can be hard to come by for people in poor and working-class neighborhoods. Imported books are expensive, and lending libraries are few and far between.

Twenty-four hours a day, seven days a week, Nanie's lawn is full of people browsing the stacks, children doing research for school projects, and neighbors dropping off new books. He has started a book bike service, regularly peddling a sidecar full of books to families in Manila's poorest neighborhoods, and has plans to start a book boat to take books to the islands of Sulu and Basilan. He has also helped people in other provinces set up their own no-rules community libraries and donated books to schools and libraries around the nation. In short, he's a literary superhero.

Are no-rules, 24/7 community libraries like this the future of book-lending?

Kevin Maddox from Melstrand, Mi is reading Slaughterhouse-Five by Kurt Vonnegut September 26, 2012 - 8:00am

That is really cool. I was just thinking about what it would take for me to start a 24/7 Library-Eatery/Venue.

There's one at the PDX airport, but it's within restaurant hours. I donate my books there, and take some while traveling.