Man of Steel Quits Daily Planet To Become A Blogger 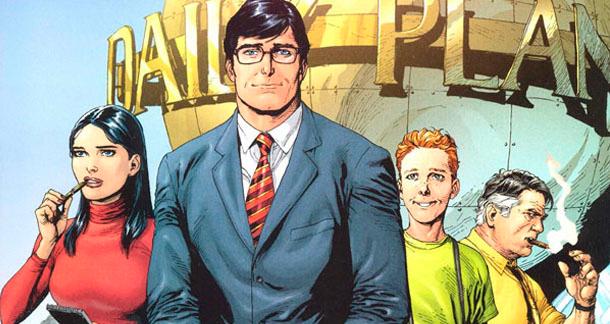 Unreasonable deadlines, the pressures of delivering front-page exclusives and the office politics of major metropolitan newspapers are familiar to many journalists, yet few reporters choose to turn their backs on steady gigs, especially in today’s economy. However, that’s exactly what formerly mild-mannered Clark Kent chooses to do in the latest issue of DC Comics’ Superman, writer Scott Lobdell told USA Today.

In a fit of rage, Kent announces he’s quitting The Daily Planet to the entire newsroom, claiming that true journalism has given way to entertainment, mirroring real-life trends in the mainstream media. Kent’s decision to quit print and move online is something that many comic fans have speculated about for years.

“I don't think he's going to be filling out an application anywhere,” Lobdell, who is relatively new to the franchise, told the news source. “He is more likely to start the next Huffington Post or the next Drudge Report than he is to go find someone else to get assignments or draw a paycheck from.”

This isn’t the first time Kent has left The Daily Planet. According to Comic Book Resources, Kent was removed from the Planet’s editorial staff in the 1970s after the paper was purchased by Galaxy Broadcasting, at which point he became a news anchor for WGBS-TV.

Will Kent’s decision to turn his back on the Planet and strike out on his own breathe new life into the aging franchise?

Dwayne from Cincinnati, Ohio (suburbs) is reading books that rotate to often to keep this updated October 25, 2012 - 9:51am

It will still be boring, because his basic problem is the power set. He either A) can do anything and can't be stopped or B)has those stripped, becoming useless. His powers just do not set him up for any kind of conflict, and who wants to pay $3.99 to read about a guy without real problems and/or a way to fix them? Other heroes (Spider-Man, Wonder Woman, etc.) have powers that let them get into conflicts they otherwise couldn't.

Worse, few who work on him seem to even sort of get that. They seem to think the problem is his ethics/life style being too old fashioned, ignoring the fact that Capitan America makes sups look like party animal and sells pretty well.

How cool. I love Superman, and the evils of today could really use a guy like him--across the world, not just in the U.S. As a "freelancer" he could gain access to a wide array of storylines that his naive cover would play to, e.g., "Oh, gosh, how did I find myself in the War Room overhearing evil world domination by this issue's antagonist? So sorry, I'm just a stupid blogger. Must be this stupid GPS device. I set it for the Washington Monument and it took me here." The foreign storylines could read more like a James Bond, connecting the dots at the U.N., covering the Summit, taking on emerging terror cells in France while reporting on a new French cheese. Come on, the possibilities are endless! The only question is: Without phone booths for the most part, will he step into a Sprint, AT&T or Verizon store for a quick change? I'd tune in to find out.

Maybe Clark has an "in" with Superman the same way Peter Parker was Spider-Man's "official photographer."

Brandon pretty much said what I was thinking. Actually, the first thing to come out of my mouth was, "WHAT?!" haha. Looks like Superman will cover the real news, because he will witness it first hand and will be able to give a "blow-by-blow" of sorts. It could be interesting.