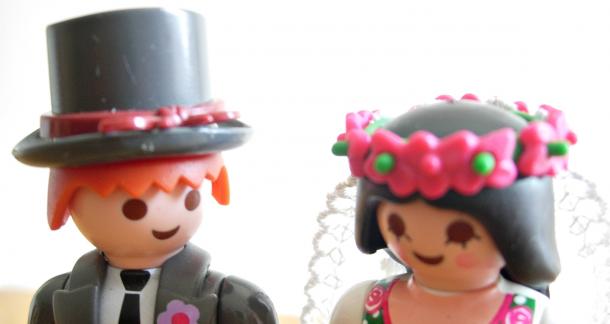 I will be with you through sickness, [...] profound sadness, delirious highs, crippling insecurity, epic personal f**k-ups, and the inevitable critical backlash. Till death do us part, which realistically may be in about 5 years.

With these words, comic book artist Simon Hanselmann married a stack of comic books at the Small Press Expo in Bethesda, Maryland.

Hanselmann, dressed as a beautiful bride complete with flowing white dress and flattering makeup, did it right. Vows were exchanged, and there was a kiss between Hanselmann and comics publisher Gary Groth. They had a brass band, they had a chocolate fountain.

Comics' vows were read by cartoonist Michael DeForge. One only hopes that comics did not have any puritan relatives in the crowd as things got a bit racy:

Nobody can touch your fluid pacing, your watercolors are tighter than Hergé’s. When you touch me, I melt like a sexual ice cream… Your hands are magic, I want them all over me.

Hanselmann's comic Life Zone was an Ignatz-nominated book for outstanding story this year, and his web comic Megg, Mogg, and Owl is set for a print release by publisher Fantagraphics.

My question to you: Which book would you marry, and can we get a taste of the vows?