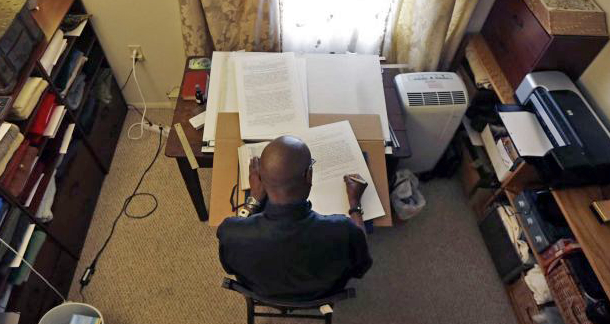 Hand-written copies of the Bible used to be all there were until Gutenberg famously created his press with movable type. That revolution changed the way we view books forever. Phillip Patterson, a retired interior designer from New York, has been going back to the old way of doing things: namely, he’s copied, word for word, the entire King James Bible.

One day in 2007, his longtime partner, Mohammad, mentioned that Islam has a tradition of writing out the Qur'an. Patterson replied that the Bible was too long. Mohammad said, well then, Patterson should do it. "The next day I started researching pens and pencils and paper and never looked back," he said.

He started a test version in 2007 with the first five books of the Bible, before launching into the full book in 2009. Using felt-tip pens on 19-by-13-inch watercolor, Patterson works at a wooden desk by his bed. He used to spend 14 hours a day on the project, but health issues have reduced his working hours to about 8 per day. And doing the project has changed a few things about him, most notably his perceptions of the Bible.

…the countless hours of transcription has led him to conclude that the Bible is more sublime than just a bunch of stories from thousands of years ago. "The begetting and the begatting and all of that, that's really incidental," he said. "These people are trying to understand where they fit into this world… Every day as I write, I discover something new and it expands my mind more and more. Not so I can become more of a religious person, but so that I can become more of a whole person."

Photographer Laura Glazer has documented Patterson’s project since the start, taking some 4,000 pictures. "He's not trying to prove anything to anybody. He's making something beautiful." The project is scheduled to finish on the 11th of May at a special service where Patterson will write the final lines of the Book of Revelation. Once bound, the books of Patterson’s Bible will be given to the church.

Does copying something like this give us a better understanding of what the authors were trying achieve? It certainly makes it more personal, in my opinion.

Those Pigma Micron pens are amazing.

Sounds fun, I don't think I would ever entertain the idea of a project like that if I can think of anything else to do with my time, though I'm not retired or have a long term illness. There could be worse ways to idle away the hours, I'm sure I'm guilty of a few of them, and most don't end with having an awesome/beautiful product at the end of it.

That's why I'm not allowed back in the Louvre