Love, Murder, and Betrayal? There’s an App For That 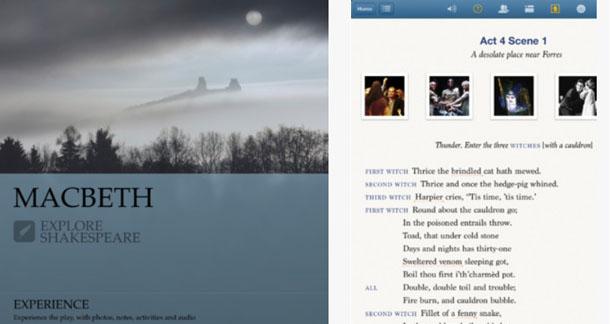 The plays of William Shakespeare are arguably the finest ever written. Leveraging the power of modern technology to bring two of The Bard’s most beloved works to a wider audience, Cambridge University Press has partnered with mobile app developer Agant to launch two new iPad apps that take readers deeper into the worlds of Romeo and Juliet and MacBeth, reports Guardian Books.

In addition to the complete texts of both plays, Romeo and Juliet: Explore Shakespeare and MacBeth: Explore Shakespeare will feature plot summaries, glossaries, extensive notes by literary experts and Bard scholars, photographs from professional productions of the two plays, and audio performances. Users will also be able to visualize the relationships between characters in a given scene using a “circles” feature, as well as see how themes develop throughout the plays using the apps' "themelines" function.

“These apps are about making Shakespeare accessible for everyone,” said Matt Harvey, marketing director for Cambridge University Press, at the app’s launch event in London.

John Pettigrew, digital strategic development manager at Cambridge University Press, said the apps cost “in the mid five-figures” to develop, and four more Shakespeare plays are expected to be launched as part of the series in the next two to three months.

What other Shakespeare plays would you like to see go digital?

Macbeth is easily my favorite of Shakespeare's plays, so it's good to see that one coming out at the launch of these apps. The next obvious two would be Hamlet and Othello, I think. Although, the Richard II-Henry V series of plays would be nice to have a good chunk of backstory throughout, as they're pretty dense and sometimes difficult to follow.

Whatever they end up doing next, I'm excited. This is a great idea.