Louis And Ordell From 'Jackie Brown' Returning To The Silver Screen 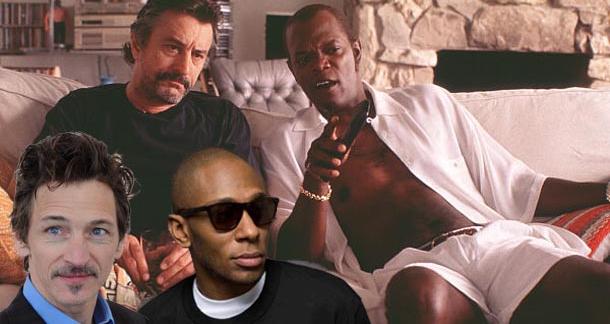 Louis Gara and Ordell Robbie, the characters portrayed so wonderfully by Robert DeNiro and Samuel L Jackson in Jackie Brown, are coming back.

Except DeNiro and Jackson aren't involved. Nor is Quentin Tarantino. And it's a prequel.

The characters will be resurrected for a movie based on Elmore Leanord's novel The Switch, which takes place 15 years prior to the events of Rum Punch, the book on which Jackie Brown was based.

Filling the shoes of DeNiro and Jackson are John Hawkes and Yasiin Bey (a.k.a. Mos Def).

And according to Variety, writer/director Dan Schechter didn't even have the rights to the novel when he wrote the script. He just banged it out and sent it to Leonard's rep. The author was so impressed, he and his rep gave the young filmmaker the rights and came on board as producers.

Here's a summary of the novel, The Switch:

Ordell Robbie and Louis Gara hit it off in prison, where they were both doing time for grand theft auto. Now that they're out, they're joining forces for one big score. The plan is to kidnap the wife of a wealthy Detroit developer and hold her for ransom. But they didn't figure the lowlife husband wouldn't want his lady back. So it's time for Plan B and the opportunity to make a real killing -- with the unlikely help of a beautiful, ticked-off housewife who's hungry for a large helping of sweet revenge.

Not a bad choice, right? Hawkes seems pretty cool, and Bey/Def is a solid actor. I'm always happy to see him. What do you think?

Being Jackie Brown is one of the most criminally underrated Tarantino films every made, I'm very psyched that The Switch is getting the film treatment.  While I'm not crazy about either Hawke or Mos Def (unless he's paired with Talib Kwali, but that's another story), a young, vibrant director may just make it work.  Much is goign to hinge on the chemistry between Hawke and Def, and while they won't be Jackson/DeNiro, it just might work.

Joshua Chaplinsky from New York is reading a lot more during the quarantine February 3, 2012 - 4:25pm

Hawkes is one of the best actors working right now. I'll watch him in anything. And Def is alright. He was in a little-seen meta-noir I really liked called Where's Marlowe?

Rachel Harris from Cumberland Basin is reading mindless fluff (god, its so hard to get through, ugh) February 8, 2012 - 11:16am

hawkes is excellent- esp loved his portrayal of the writer he played on the episode milagra (xfiles), but do i see him being as pathetically stoopid as deniro's brutish character- not really- same goes for mos def- i mean, all you have to see is the sparkle in his eyes to know that he would not bail you out of jail, pick you up and then shoot you in the back of the head and leave your dead body in the trunk.  not sure how that either one of them would work in those roles.