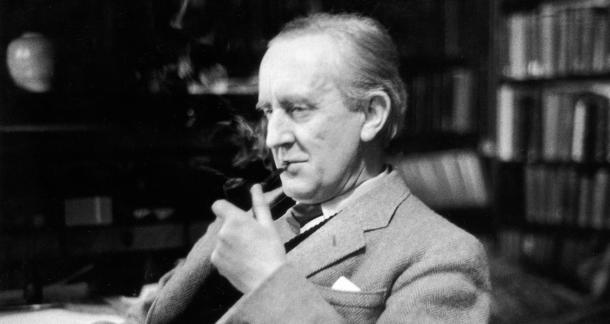 J.R.R. Tolkien, legendary author of Lord of the Rings, is the gift that keeps on giving. In recent years many of his forgotten works have surfaced, such as a retelling of The Story of Kullervo and the unfinished Middle-earth story The Children of Húrin, providing fans with a renewed fix of his unique writing style. Now two more lost poems penned by Tolkien have been uncovered, reports The Guardian.

The previously unseen poems were found in a school magazine in Abingdon, Oxfordshire. Published while Tolkien was a professor of Anglo Saxon at Oxford University in 1936, the works were only rediscovered after Tolkien scholar Wayne Hammond read a note from the author that mentioned the poems had been published in the Abingdon Chronicle.

Hammond contacted Our Lady’s School head teacher, Stephen Oliver, and the two worked in tandem to find the newspaper issue in question. The school now plans to showcase the poems at an upcoming historical exhibition.

The Shadow Man, one of the uncovered poems, is an earlier draft of a poem found in The Adventures of Tom Bombadil. The prose describe “a man who dwelt alone / beneath the moon in shadow.” The second poem is called Noel and celebrates the Christmas season, referring to “the lord of snows”: “The hall was dark without song or light / The fires were fallen dead.”

What do you hope the next rediscovered Tolkien work will be?