Look Out, Wattpad—Amazon Releases 'Write On' to Public 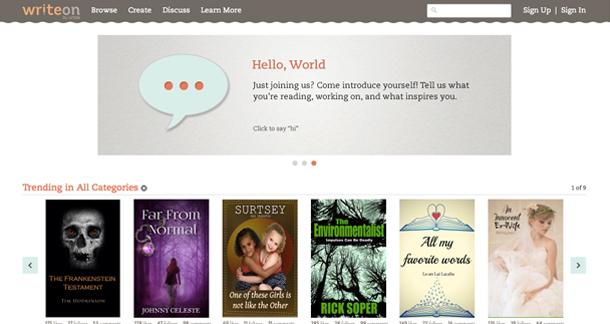 Amazon has recently expanded its literary scope again, launching the official non-beta version of Write On, its new crowd-publishing platform, reports TechCrunch. The tool hopes to compete with the likes of Wattpad, a social networking site that allows self-published authors to post their content for free so that others in the community can provide feedback for works-in-progress.

WattPad currently averages 40 million active members per month, which is a tall order for Amazon’s new platform to beat. Write On will allow users to post whatever they’re working on at any stage, from full chapters to character sketches. The community will then be able to respond to those submissions with feedback. Don’t feel like putting your work out there for the world to see? Users can choose a read-only role and spend their time browsing through a plethora of content posted by other community members.

Write On seems to be just one tool of many that Amazon has developed for writers. Kindle Scout, another recently released option, allows authors to submit full-length works for community feedback. Those that fair well to the crowd’s scrutiny stand a chance of being chosen for digital publication by Kindle.

Through these communities Amazon has created a full service suite for self-publishing authors: one can start a manuscript while using Write On’s services to polish along the way, then submit the finished draft to Scout, and finally have that completed work made available for sale.

What do those out there in the ‘Verse think? Does Write On sound like a brilliant idea meant to help writers develop skills, or is it just another ploy by Amazon in the company’s seemingly ultimate goal of world domination?