UPDATED WITH WINNER -- Little Punk on the Prairie: Win A Copy of 'Ghost Dances' by Josh Garrett-Davis 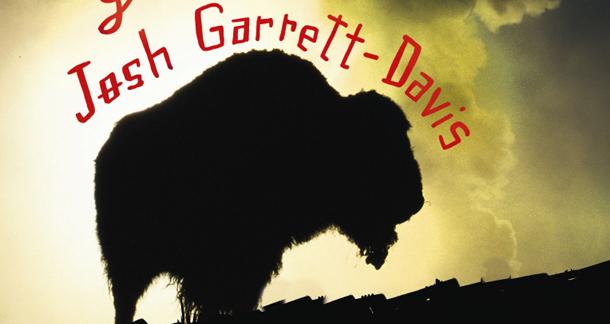 And the lucky recipient as chosen by the gods of randomness is: WERUS! A Teacher, cleaner, consoler from Portland, OR, [who] is reading '1493, A Clash of Kings, King Solomon's Mines, With Liberty and Justice For Some, The New Annotated Sherlock Holmes'.

PM me your address so I can send you your prize. Enjoy the book, and definitely come back and let us know what you think. Everyone else, go out and buy that shit!

Are you a veteran bemoaner of the lack of originality exhibited by publishing's Big Six? Looking to give your complain box a rest and read something wholly unique? Then have I got the book for you: Josh Garrett-Davis' historical punk rock plains memoir, Ghost Dances: Proving Up on the Great Plains.

Full disclosure: I used to be in a band that played/shared a drummer with Josh's band (although, I had no idea he was an Ivy-Leager, so shame on me), but that's not why I'm promoting his book. In fact, when he first offered to send me a copy, I was well wary. You want to help your friends out, but you don't want to promote crap out of obligation, either. You also want to avoid the awkwardness a less than stellar review might bring.

Luckily, Ghost Dances is great. Josh's book is interesting, insightful, and superbly researched. (A perfect example would be the chapter in which Josh juxtaposes the battle over Sue The Dinosaur's bones and his parents' own custody battle over his younger self.)  It is also a tough book to encapsulate, so I'll let Josh do the honors:

I spent most of my twenties living in New York City, trying to figure out what I wanted to do, playing bass in a punk band, and writing acoustic folk-punk songs about the American West (there's still a MySpace page out there somewhere). I kept wanting to make sense of where and how I grew up: South Dakota, only child, divorced parents, left-wing dad, summers with lesbian mom in Portland, Oregon, etc. By writing some journalism about the Great Plains, reading history books and novels, and going back to visit, I gradually began to assemble a personal mythology of the Plains region as it is and as I wanted it to be. (I was quite taken with the ways the indie band Calexico had re-imagined the Southwest borderlands in a similar way.) The more I delved into the Plains, the more I realized I had to tell my own story as well, to show why all these pieces might fit together. So that's how I wound up with a book that's part memoir, part journalism, part history, and part essay—which I hope all adds up to a strange but interesting picture of an important and huge swath of the North American continent and the people who live(d) there. Among those people were me and my weird family.

Has your interest been sufficiently piqued? Sound off in the comments for a chance to win a copy. I'll pick one person at random to be the lucky recipient of a nice, shiny hardback. Winner announced Monday, September 17th.

A punk memoir with journalistic roots that explores the American West!? Count me in!

swap my ninny. this sounds like a swirling dose of so much that I love.

This sounds great(count me in, too)

Punk rock histomemessayism is exactly what I've been looking for as of late. This sounds like the perfect buffalo burger to please my appetite.

As someone who was raised in the west and grew up playing in several punk bands just like all my brothers, this sounds like the perfect read.

As a teenager in Minneapolis I grew up in a pretty vibrant rock scene, and I can tell you punk is alive and well in the midwest. I myself have no musical talent but ingratiated myself into the scene and had the pleasure of accompanying friends to gigs all over the windswept plains. Some of the craziest shows I've seen have been in places like Fargo, Madison, St. Cloud and Sioux Falls.

Excited to read this book, either way!

I want this for my husband! Also myself, but  mostly my husband. Would be a kick-ass anniversary gift.

Sound off. Coming from / currently living Oklahoma, yet also living in Chicago, Austin and soon-to-be NYC, I understand perfectly well where this author is coming from.

David Ireland from London is reading Confessions of an English Opium-Eater September 11, 2012 - 1:35am

Oh yes...a voice of my generation writing about punk rock? I grew up in a rural area and punk was my main escape. This sounds like it will tickle my fancy until I pee a little.

Having lived through the '80's punk scene out here in Utah, I was rather disappointed at the portrayal of 'our' lives in the film SLC Punk. There is an edge out here, still, albeit whatever rock it's hidden under I have yet to find. This book looks like a really fresh view of life out here in the Mid-West-West.

Jeremy Huerta-Miller from Santa Rosa, CA is reading The Last Policeman September 16, 2012 - 9:29am

All of this sounds good. ALL. OF.  THIS!

Sounds intriguing for sure. Would love to take a look.

Joshua Chaplinsky from New York is reading a lot more during the quarantine October 14, 2012 - 4:51pm

Well, it's been over a month and WERUS has yet to respond, so first person WHO ORIGINALLY PARTICIPATED to reply to this post gets the book.

Replying with my reply.

Joshua Chaplinsky from New York is reading a lot more during the quarantine October 17, 2012 - 9:24am

Okay, Bret it is. PM me your address.