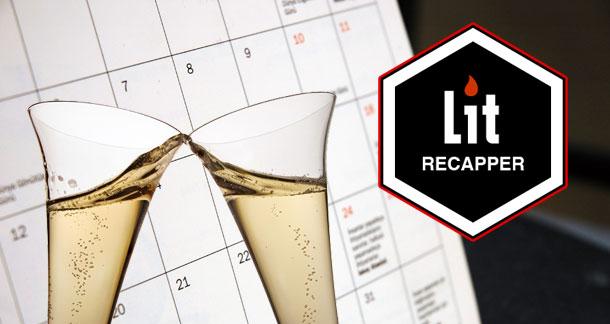 Today is LitReactor's six month anniversary! Time to pop the bubbly and cue the Manilow!

Okay, so technically, if you count our soft launch (of which I famously tweeted, Our launch may be soft, but my book boner isn't), our anniversary was Sunday. Either way, six months is a long time in internet years. Personally, I'm happy to share the date with the April Fools and that moveable feast known alternately as Jesus Ass Riding and Frond Holocaust Day. Thems good neighbors.

I remember it like it was yesterday. I had already committed to being a columnist when the call came down from head office, asking if I wanted to don the pantalones of Senor [sic] Editor. I had turned down an offer to work with Dennis on ChuckPalahniuk.net way back in 1999 because I didn't think this internet thing was gonna last, so this was my first chance to make a second impression. I packed my bags and said goodbye to my free time and social life. Cut back to the present and my complexion is jaundiced from too many late nights basking in the glow of my computer screen and I'm starting to forget what the soothing grope of an enterprising young lady feels like.

But enough about me; it's time to celebrate the site. And that means celebrating members! As of today, we're 6,600 long and strong, and let me tell you, they're bound to get their fiction on. We also have countless lurkers, skulking in the shadows like so many Smeagol (come out and join us!). Our forum has over 56,000 posts. Our workshop has more than 540 submissions and we've handed out over 6,200 achievements (they are like crack!). One of our members, jacks_username, even took his fandom to a permanent level:

That makes us legitimate, right? (Or him crazy.)

Part of our success is due to the writers here at LitReactor, who've led the charge with three small "events" geared to prompt people into producing work. First there were the writer battles of THUNDERDOME, where members could challenge each other to timed writing contests. Then came WAR, a tournament-style competition designed to crown a site champion (everyone loves brackets). And submissions just closed on a member-created ANTHOLOGY, featuring the best psychosis-themed stories from our workshop.

While our community tears it up, our magazine contributors have also seen success. KEITH RAWSON, our resident crime fiction expert, just published his short story collection, Laughing At Dead Men. BH SHEPHERD, our newest Comic contributor, just saw his new book, Sweet Benny and the Sanchez Penitentiary Band, released for the Amazon Kindle. Our other comic contributor, KELLY THOMPSON, penned a story featured in the female-centric comic anthology, Womanthology. And LitReactor co-founder PHIL JOURDAN is honoring his mother's passing with a heartfelt memoir, Praise of Motherhood, due out May 16th.

Our magazine has also been driving huge amounts of traffic to the site. On February 10th alone, we saw almost 100,000 visits due to the success of Jon Gingerich's 20 Common Grammar Mistakes That (almost) Everyone Makes. The column quickly went viral, getting picked up by a host of popular sites, making it the most popular piece of content we've published so far. But we didn't stop there; not even two weeks later Rob Hart's Top 10 Words That Need To Die, Immediately nearly pushed the site's servers to the breaking point.

Everyone loves lists, but we've taken it deeper than that: Do you want to learn how to get a literary agent? Richard Thomas has some great advice for you. Did you know that visiting a gun range could make you a better writer? Rob Hart explains why. Do you want to master the art of extended metaphors in your writing? Here's Taylor Houston, to show you how. Do you want to join a discussion on the proposed 'death of controversy' in literature? Here's John Jarzemsky, stoking the flames of conflict.

In April we're following up the success of our magazine with some new interactive columns, contests and giveaways. This Friday, we'll ask you to show us your best literary tattoos, and two winners will qualify for a host of rewards, including a free six month membership to our ground-breaking workshop. We're also unveiling a new column today called Guess The Plot, based on some very weird sci-fi book covers.

Spring/summer is a busy time for our online classes, as our ever-expanding roster adds some new faces. The master of horror and suspense, JACK KETCHUM, joins us for a new class on May 9th (details soon!). And if that's not enough horror for you, we have a joint class in June, taught by four instructors from the Shirly Jackson foundation. Celebrated craft columnist, JON GINGERICH, steps up to the podium with a beginner-friendly class, The Fundamentals of Short Fiction, starting April 23rd. And VANESSA VESELKA, author of the critically acclaimed novel Zazen (and recommended to us by Craig Clevenger), is teaching a five-week class, Leading With Voice, about generating strong, authentic first person narrators. That starts next week. We also have returning champion HOLIDAY REINHORN, teaching an encore of her extremely helpful six-week class Embracing The Practice. And June will see the return of BREE OGDEN and her popular Intro to Writing Graphic Novels class.

We want to close by thanking you all for your continued support. It's you, the writer, the reader, that we do this for. So make your voice heard. If you haven't already, join our Community and introduce yourself. Begin commenting on our Magazine. Check out our Classes or take a peek at our Workshop. And don't forget about our social media. Our Twitter and Facebook are a great way to keep tabs on news and events with almost 4,000 followers and 5,000 Likes respectively. And our Tumblr is almost a website unto itself, with 234 posts and 672 followers. It features pictures, quotes, video and links you won't find here.

Thanks to Dennis, Rob and Kirk for their contributions, which were about 75%.

edsikov from New York by way of Natrona Hts PA is reading absolutely nothing April 3, 2012 - 8:11am

R.Moon from The City of Champions is reading The Last Thing He Wanted by Joan Didion; Story Structure Architect by Victoria Lynn Schimdt PH.D; Creating Characters by the editors of Writer's Digest April 3, 2012 - 9:20am

You've given me a new addiction Lit Reactor. Everything here is amazing. The magazine content, articles, contests and most of all, the writers and readers. I have not found a more eclectic group of writers anywhere else on the web. My writing has grown exponentially thanks to the outstanding critiques of my work. So, I give a special thank you to all the members. You guys/gals rule!

You too Moon, you too. Has anyone popped a real bottle of champagne yet?

Joshua Chaplinsky from New York is reading a lot more during the quarantine April 3, 2012 - 10:49am

I had a Dr. Brown's Black Cherry with lunch.

Oh, and thanks for mentioning the other anthology that isn't over.

one hell of a wild six months, yeah? i was worried this place might have a hard time catching on,  but wow, so many great people, and the talent of the authors in the workshop is just amazing. this has been a blast. thanks for all of the support, guys.

R.Moon from The City of Champions is reading The Last Thing He Wanted by Joan Didion; Story Structure Architect by Victoria Lynn Schimdt PH.D; Creating Characters by the editors of Writer's Digest April 3, 2012 - 9:21pm

We all love ya Richard... And, thanks for your support! I think it's pretty rad you've been competing in Thunderdome and War with us all. You're a voice of motivation, inspiration and encouragement.

We love you Lit Reactor xoxo

^thanks, moon. i'm getting a workout myself, every round has been tough, no easy layups in this tournament.