LitReactor Takes Portland: Notes On Our Second Meetup And Our Wordstock Appearance 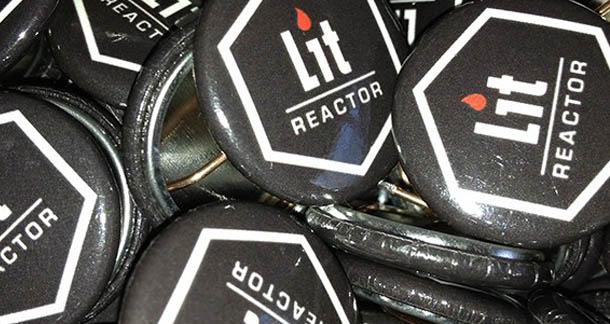 This past weekend LitReactor descended upon Portland, for its second meetup and its first convention appearance. Both went extremely well!

The meetup was a huge success. All told, around 40 people stopped by, including a number of our class instructors--Bree Ogden, Jon Gingerich, Lidia Yuknavitch, Suzy Vitello and Johnny Shaw (whose class starts next week, by the way). It also featured our co-founders Dennis Widmyer and Kirk Clawes, and our education director, Mark Vanderpool. And Kara Kilgore! And Taylor Houston! And Dakota, the guy who got the LitReactor logo tattooed on his forearm! And a whole bunch of other people! (The pictures are a little dark; blame Dennis.)

We'd like to tip our hat to Chester Pane for setting it up, and to the nice folks at Radio Room for hosting us. Great drinks, great food--if you're in the neighborhood, check it out. Try the polenta.

Wordstock went very well, too. We learned a good lesson: When you have a banner over your booth, keep it a little vague. Then people have to come ask you what you do! People expressed a lot of interest in what we were doing--specifically, our workshop and our classes. Again, Bree, Jon, Lidia, Suzy and Johnny were great, hanging around and talking us up.

We also unveiled our new t-shirts! Which are awesome and everyone wanted and we didn't have enough. More on that, soon.

It was another great chance to meet our members and make some new friends. But more importantly, it fostered that thing that we've been driving for ever since the beginning--a sense of community. It's great to get together with some like-minded individuals and realize that, despite all the bits and bytes between us, we're all struggling with similar issues and striving toward similar goals.

If you were at the meetup or met us at Wordstock, why not reminisce a little, down in the comments?

Is Chester trying to EAT Dakota in that picture?!

By reminisce you mean wring out my liver, right? That was THE BEST fun, ever. And I know fun. Thank you, guys! You've set the bar awfully high for my first Wordstock/writer's conference.

Suzy is amazing; not only does she have reading laser beams, she's a sparkling conversationalist.

I may have a small crush on Dennis; he has great hair.

I'm not convinced that NikkiG is not at least part vampire; she is way young in the face in the best way.

I asked Jon Gingrich a grammar question near the end of the night and lost interest in about twenty seconds flat; I had the attention span of a scotch soaked newt by midnight despite his great tattoos.

Taylor is AWESOME! She and I seemed like magnets all weekend.

Everyone was absolutely lovely, lovely, lovely. And it was really swell to be the biggest redneck in the crowd for once; Kara heard me talking about moosecock and I swear her Georgian jaw hit the floor.

Mark can communicate telepathically. It's true.

Lidia and I made out in what she called a lovemaul; I cried a little and she peed. Just like our on-line relationship, only wetter and better.

FTR, Chester tried to eat everyone at least once.

R.Moon from The City of Champions is reading The Last Thing He Wanted by Joan Didion; Story Structure Architect by Victoria Lynn Schimdt PH.D; Creating Characters by the editors of Writer's Digest October 17, 2012 - 1:39pm

I've actually been kicking around the idea of a St. Louis meetup, but was thinking along the lines of next June.

I live in Memphis. I could easily make a road trip to St. Louis. Plus I love that city. I was going to suggest St. Louis, Nashville, or Atlanta. I also love Chicago but that's starting to get to far to drive for one weekend.

Joshua Chaplinsky from New York is reading a lot more during the quarantine October 17, 2012 - 2:20pm

Bummed I couldn't make this. I want west coast ladies to have crushes on me and like my hair.

chicago, natch. or, i could do st. louis. i remember a Cult meetup in NYC that was a BLAST many, many years ago. good times.

Sad I couldn't make it- somewhere in the Midwest would be really fantastic. Glad it was a success!

"But more importantly, it fostered that thing that we've been driving for ever since the beginning--a sense of community."

Well said. I was only around for a little bit on Friday and here and there over the weekend, but it's the first time I felt a part of a community since I left college. I don't think there's a cooler, smarter, funner (that's right, I used it) group out there, and I'm so glad to be a part of it.

Thanks for the clandestine donut, awesome shirt, and horrible twitter pics! And drea is right, Dennis does have great hair. Also, I feel like I know more about his cat than anyone I met...

I am totally down for a St Louis meet-up for us forgotten Midwesterners!  I'd love to meet some of you people.

Also, I really love that picture of Dakota and Chester.  I like seeing my friends together and happy.

Which is the nicest thing I've ever said on this site.

R.Moon from The City of Champions is reading The Last Thing He Wanted by Joan Didion; Story Structure Architect by Victoria Lynn Schimdt PH.D; Creating Characters by the editors of Writer's Digest October 18, 2012 - 8:40am

Shit, we can have the meetup at the Andy Warhol Museum.

Is Chester trying to EAT Dakota in that picture?!

Chester was wowed by Dakota's LitReactor tattoo. It was freakin' awesome in real life.

Charleston, SC has some of the best food on the planet. Drinks too.

Just throwing it out there!  :)

Taylor from Durango, Colorado but living in Portland, Oregon is reading The Paradox Hotel by Rob Hart October 18, 2012 - 1:50pm

@drea: Ditto! You know you were following me. (Or I was I following you?!)

@Everyone: The meet up was so fun. Felt like a family reunion--the kind where you LIKE your family members AND they all want to hear about what you've been writing and reading lately AND they don't raise their eyebrows skeptically when you say you are a writer. Ok, so maybe it was nothing like a family reunion, but it definitely felt like a brothas/sistas from anotha motha/mista situtation. (I apologize for the last sentence. I have not recovered my full mental capacity after last weekend' s reveries. Oy.)

Next Meetup should be in the Midwest. You guys were missed.

Or we all meet up somewhere tropical and sip drinks on the beach while discussing craft and literary conventions. (Heaven)

XXOO to the whole crew.

I am green-purple-orange with jealousy, but all I can say is that I'll try to make to the next one. I'm glad you all met in person and had fun though! Who's writing the official short story based on the meet-up?