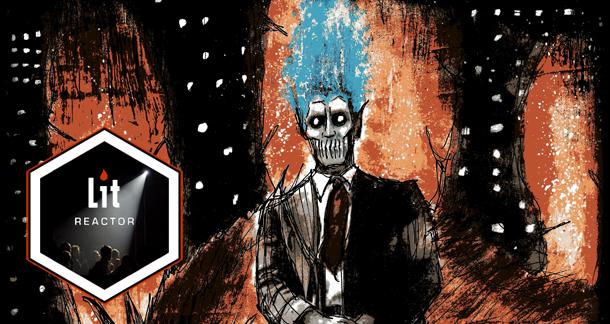 In an effort to support our amazing community or writers, readers, publishers, and generally wonderful people, LitReactor has started this series with the sole purpose of shining a light on different members of our community and the things they’re doing.  We have great people here, and they deserve to be recognized in all their writerly glory. Every couple of weeks I'll turn the spotlight on a different member.

So without further ado or backstory, our very first member spotlight is focusing on Sound, – also known as Mathew Garcia - the creative force behind Pantheon Magazine.

Pantheon Magazine is a quarterly Grecian God/Goddess themed print and online journal that publishes both established and up and coming writers.

Payment is ¼ cent per word for short fiction (under 7500 words) with a $10 minimum.  They publish short fiction, film reviews, author/musician interviews, serials, and feature some great original art to accompany each fiction piece.

I’ve heard from several contributors that seeing the art that is to accompany their story is one of the highlights of getting into Pantheon. I asked Matt to tell me a little bit about the artists he’s been working with.

I’m currently working with three artists. There’s Luke Spooner/Carrion House who I was very fortunate to have the opportunity to work with. If you take a look on the site, 95% of the artwork you will see comes from him. He’s amazing to work with and talented to boot. His artwork has sprouted up more and more in magazines such as Bete Noire, SQ mag, among others. I hope to continue working with him in the coming issues, and any projects that pop up along the way.

Our latest serial, yet to debut, by Jason Lairamore (“The Wallis Tree”) features artwork by Jason Cole, who is known for fantasy and sci-fi illustrations, most recently Pulp Modern. Although this is all he’s provided to date, I’m looking forward to working with him more in the future.

And lastly, Lena Yuk has recently signed on to provide the cover art for the Aphrodite issue, due out April 2014. You can take a look at her work at www.LenaYuk.com, and if you head on over to Nightmare Magazine. She’s featured in the Artist Spotlight section for the August issue. I can’t wait to see what she creates, and hope she’ll consider doing more artwork for us down the line.

At the moment there is one category open for the January 2014 issue: Dionysus.  The official deadline is December 15th, but slots fill up about a month in advance, so shoot for a mid-November date. Next year’s themes haven’t officially been announced, but Matt said he likes to give LitReactor folks the inside scoop!  So you can look forward to submissions for an Aphrodite issue opening October 1st of this year.

What makes a young aspiring writer venture out into the world of running their own literary magazine?  Matt had been considering the venture for some time and finally went for it with the help of another LitReactor community member.

Like everything else I did though, I procrastinated and procrastinated until I forgot about it. It wasn't until Courtney started her zine, Parable Press, that the idea bubbled up again. She gave me a wealth of info and more importantly, the confidence I needed to get going. The God/Goddess theme idea came about because Greek Mythology has always been something that has interested me and it was a neat way to set my magazine apart from so many other great places to submit work to.

Pantheon currently runs on a staff of one.  Matt does everything from reading submissions, notifying authors, editing, coordinating with the illustrator(s), formatting the print issues, to social media. He’s also currently on the lookout for someone to do book reviews for the magazine in addition to the great film reviews Bill Tucker contributes.

In addition to all of that, Matt had the exciting privilege of interviewing Pulitzer Prize winning author Junot Diaz. You can check out the interview on Pantheon's website. When I asked him how he got in touch with Diaz he had this to say:

It was very surreal. I’ve been a big fan of his since I first read Drown years ago, and to ask him a few questions was an amazing opportunity. I thought about sending a few emails out to some of the authors I most admired and he was #1 on my list. There was Stephen King too, who is the reason I grew to love reading and writing, but I knew he would be impossible to get a hold of. He had no listed email, no fan club, and although his site mentioned he sometimes dropped by the forum to read through the messages, I doubted it.

While I didn’t think Junot Diaz would be much easier to get a hold of, I decided: What the hell, right? And sent him an email. Lo and behold, thirty minutes later, there in my inbox sat an email with his name in capital letters with a brief reply: a short interview? Of course. Please send questions. j

It was so simple you’d think he was nobody important, not a Pulitzer Prize winning author. He did me a massive favor in replying. It’s huge because I feel that this gives my fledgling magazine some legitimacy that can take years to accrue. That’s what I think, anyway. Not to mention he’s an author I really look up to. My wife might tell you that I cried like a baby, but she’s a liar. :)

Anyway, I’d like to continue reaching out. Maybe I’ll get lucky. Down the line you might see an interview with Neil Gaiman, Chuck Palahniuk (hint hint), and maybe even Stephen King.

There are two issues of Pantheon currently available.  Check out both Hades and Artemis. They feature beautiful artwork and great fiction, not to mention a few author names that are probably familiar to the folks in the community.

Aside from the magazine, Matt also writes and puts out his own fiction.  When asked he gave me this nice little rundown of his favorite stories:  “Little Gods” at B O D Y Literature, and “Three Steps to Finding Jesus” at Parable Press, “Face Full of Asphalt” at Shotgun Honey, and “Big Bang, Inc.” at Swamp Biscuits & Tea.

Be sure to check out the happenings at Pantheon.  With his dedication, I expect to see even more exciting things from them in the future.

very cool. i love what Matt and Pantheon is doing. my story "Head Like a Hole" will be in the Dionysus issue. keep up the great work, Matt. love the art, too.

R.Moon from The City of Champions is reading The Last Thing He Wanted by Joan Didion; Story Structure Architect by Victoria Lynn Schimdt PH.D; Creating Characters by the editors of Writer's Digest August 30, 2013 - 8:41am

Very cool. Very well done, Jessica. I am excited and happy to be a part of the Pantheon author family.

A column like this is long overdue at LR, and I'm so excited you're taking up the mantle to bring our diverse community talents to light, Jessica. Congrats on all your success as well, Matt; that's some cool stuff, there.

Great column Jessica, look foward to more of these :)

Fabulous column! It's great to see Matt and his hard work getting love here.

Mess_Jess from Sydney, Australia, living in Toronto, Canada is reading Perfect by Rachael Joyce August 30, 2013 - 9:53am

This is fantastic! I love the concept of the column, so many cool things are bubbling away behind the scenes here with our LitReactor members, and Matt's magazine is so polished and professional.

Congrats, Matt! This is such a cool thing that Litreactor is doing (hopefully Parable and Dark House Press are coming soon). I'm honored to be a part of both Pantheon and this crazy, loveable site.

Jonathan Riley from Memphis, Tennessee is reading Flashover by Gordon Highland August 30, 2013 - 11:55am

Love the new Community Spotlight article Jessica. I look forward to reading up on the LitReactor members every couple weeks. Great Job.

Congrats also to Mathew Garcia for all the great work he does, not only here in the LitReactor workshop but as a published author and as Publisher/Editor of Pantheon Magazine. Can't wait for the next issue.

Great write up, Matt's doing great work and Pantheon is one of the places I am most proud to have placed a story. It's just a solid magazine. And yes, I got really emotional when I saw the artwork that accompanied my story-- really, REALLY fantastic stuff.

Thanks guys. All the support and kind words are always appreciated.

Great column Jessica. Sound you are awesome to do this.

You had such a great idea, Jessica, and this article looks like a wonderful start. It will be easier now to keep up with all the nice things Litreactor talents are doing.

And MattSound is so promising, I really enjoyed his stories here.

fpak from India (resident of Dubai) is reading Drown by Junot Diaz and the Iluustrated man by Ray Bradbury August 31, 2013 - 1:07pm

My story "Children of namesless streets" is gonna be in the next issue of the magazine!! I am pretty pleased.

fpak from India (resident of Dubai) is reading Drown by Junot Diaz and the Iluustrated man by Ray Bradbury August 31, 2013 - 1:08pm

Loved it. I've known Sound for years now, but this really helped me know 'about' him. Great fun to read.