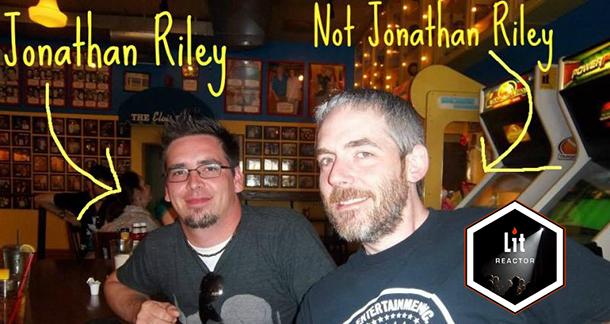 This week I want to focus on a member that truly embodies the word “community." Jonathan Riley has been a member of LitReactor since July of 2012.  The first major activity he was involved in was the site’s popular Scare Us! competition, where he won prizes for being one of the most active reviewers, and also for his original story.  I noticed him among the reviewers because I couldn’t help but notice him.  Every story I looked at had a review from Jonathan Riley.  What’s more, I tried to start a (friendly) rivalry between him and one of the other most dedicated reviewers, sean of the dead.  I’m proud to say that, while the rivalry perhaps died down, the friendship has endured.  The rival reviewers met up in June and not a single punch was thrown.  It was beautiful.

The Scare Us competition got me interested in reading again, and more importantly, reading with a critical eye. I enjoyed helping people with feedback and suggestions, because even though I wasn’t sure how to offer helpful advice, people seemed to respond positively to what I did have to offer.  This sparked my interest in joining the LitReactor workshop, where I’m quite active throwing around my opinion, and it inspired me to offer more reviews in LitReactor’s Teleport Us challenge.  I was awarded accolades by the LitReactor staff for the time and effort I spent to help other writers in both challenges. It wasn’t entirely selfless.  I learned a lot about how to look at my own writing more critically by reviewing others work.  I spent hours reading on how to review, how to write, how to offer advice and I’ve improved.  Plus there were prizes.  Very cool prizes.

Mr. Riley has racked up 256 points in the workshop with his diligent reviews.  This is only slightly less points than I have, which makes me think I should spur a rivalry between the two of us.

Jonathan isn’t just a great supporter of the writers here on LitReactor.  He’s also a writer!

I’m relatively new to writing and the world of publication, aside from working as executive editor for the University of Tennessee at Martin’s literary and visual arts magazine in 2004, I hadn’t done anything related to writing other than jotting the occasional poem, for nearly ten years.

Jonathan has always had a love for writing.  He told me his mom has a scrapbook of grade school compositions he wrote, which I think is adorable.  Writing stories was always his favorite part of school.  The scrapbook even includes the first poem he ever wrote.

I was in third grade, it was to a girl. It was really cheesy but makes me laugh.

Jonathan Riley has been instrumental in keeping the LitReactor community thriving.  He created a poetry thread, called Plight of the Poet, and started a monthly Film Club.

The coolest thing about LitReactor is the community. Not only are there talented members of the workshop that put a lot of work into writing helpful critical reviews that can really help a writer improve their story, there is always something going on in the message boards. “Flash Me!”  was one of my favorites. War was really cool too. I enjoy the picture threads and the I’m alive threads. The people here are very interesting and I’ve actually made tons of friends and found new authors whose work I’m a huge fan of.
The members aren’t the only cool thing about it though. The staff is great too. The magazine is fantastic. I enjoy writing tiny stories for the monthly Flash Fiction Fiction Smackdown. I love reading columns and articles, especially the ones geared toward improving the craft. The craft essays are also a great tool that I’ve benefited from. The new workshop feature was a really cool idea too. I’m so excited to see that up and going. (Somehow this just turned into how much I like LitReactor, sorry back to me)

Back to you indeed!!

In February, Parable Press published his Flash piece entitled, Rocked. In August, they sent out a call for applicants to assist them in reading, since they are no longer a fledgling but a growing (and paying) market.  It makes sense that our award winning reviewer would get the job.

His second publication was published in July by a literary journal called Mixitini Matrix, which concentrates on publishing artistic and literary collaborations.

I worked on a story I co-wrote with Emma Clarke, and our pal Dino Parenti created a really awesome mixed-media image to accompany it.

He was also accepted in Solarcides Flash Me! Anthology.  It’s a flash piece called “Comfort Zone”.

One of the biggest holdbacks as a writer for me was not having a network of friends to trade criticisms with. I experienced the workshop atmosphere in college, but once I returned home, I was no longer surrounded by like-minded people. When I discovered LitReactor I found that again. I never really quit writing. I always have thoughts going on inside my head, constantly creating in my mind, but now I’m actually getting those thoughts on paper again and it feels really great. It’s awesome to have friends to share it with and help through the learning process.

A beautiful sentiment to wrap up this spotlight.  I always say, the best part about LitReactor is people like you.  And Jonathan Riley.  Make sure to check out JR's published works and read some of his writing in the workshop.  He'll return the favor tenfold.

Very cool! Love seeing the photos, because I WAS THERE! I SAW THAT! It was brutal between Jessica and Jonathan (of course, I'm kidding). JR is quality, good to see him in the spotlight.

Jonathan Riley once impregnated a Playmate with a glance, and built a cabin out of a sheet of notebook paper. Also, he exists. I've met him. S'okay to be envious.

Dino Parenti from Los Angeles is reading Everything He Gets His Hands On November 1, 2013 - 1:26pm

Nice! You could not have a featured a more class act. JR has reviewed several of my stories both off and on the site, and they've invariably led to publication. But just as importantly, he's a class act. Well deserved, brother. Congrats!

sean of the dead from Madisonville, KY is reading Peckerwood, by Jed Ayres November 1, 2013 - 1:40pm

J-Rile is one of the nicest people I've ever met, so he's probably a sociopath or something. But he's also a pretty damn good writer too, not to mention an impressive drinker. I sincerely hope to hang out with him again, as well as everyone above (okay, Dino, you weren't there last time, but next time, right?)

All that said, I would totally fuck "Not Jonathan Riley" from the first picture. Or at least put a camera in his bathroom...

Well look at that handsome man.

And there's a picture of me too.

Thanks for the spotlight Jessica. Kind of makes me feel important.  And you did so well I’m going to message you something that no one else gets to read. ;)


Also, thanks for the support Renee, Gordon, Dino, Sean, and Em! You've all been important parts of my maturation in this community and as a writer. From Scare Us!, to Thunderdome, to War, to the workshop (especially where Em has helped me alot) to St. Louis and back. Thank you for that.

Also, Dino, your image with our story was awesome and you’re one of the best peer reviewers I have outside of the workshop. Rock on!!!

In other news, I’m proud to announce that as of last night I’m now a fiction editor over at Revolt Daily. I’m excited about this. Excited to be the one sending rejections rather than receiving them. Kidding. (I'm going to hate saying no) But I can’t wait to dive into submissions and start publishing excellent fiction for you all to enjoy. Or perhaps publishing fiction some of you have written.

My addition to this one is that JR reads other people's reviews of other people's stuff, which I thought was impressive. We hadn't exchanged a word until one thread I started got a PM out of him where he offered a trade of stories outside of the workshop and told me I wrote 'quality critiques.' I'd never written one for him before, that much I was sure of, but what surprised me was that he'd followed me all the way from Teleport Us eight months ago before making that comment. I said I'd have a drink for that one, and I actually did go pour some vodka before going to work on the stuff he sent me...

... and I still haven't perfected that goddamn museum scene I said I'd send him weeks ago, so I'll thank him for his patience as well!

I am a JR fan. I also love that we've all mostly changed his name from Jonathan to JR. I don't think I've ever called him Jonathan. :D

He's a brilliant writer who somehow always breaks my heart with his stories, and SUCH a sweetheart. Jessica, I'm so glad you spotlighted (spotlit??) him!!!

Jonathan Riley from Memphis, Tennessee is reading Flashover by Gordon Highland November 4, 2013 - 9:35am

Thanks Sarah, Tommy, Dave, and Leah. You guys/gals are the best.