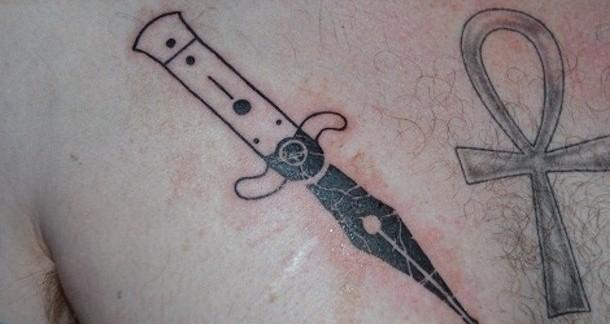 One of our favorite members, Bryan Howie, has made magic happen by getting a tattoo inspired by our Official Critic achievement and our LitReactor shirts, which were designed by Kevin Tong. This makes Bryan's 13th tattoo.  He said it was relatively painless, but I get the idea he just said that to impress me.  He was putting himself in the mood for WAR when the idea came to him. Bryan told us:

It represents the sacrifices we make as writers, both emotionally and physically.  Writing is dangerous business.  Always carry a (pen)knife.

You may recall our first official LitInk, back when Jacks_username inked our logo on his forearm.  We thought he was crazy, and maybe he is.  Or then again, he could be a trend setter.

Show off some of your own literary inspired tattoos in the comments. I don't have any myself and I'm always interested in what other people put on their skin and why.

My husband got the Vonnegut self-portrait on his shoulder a few weeks back.  What do you think of it?

To me, the coolest part about it is that my brother (a professional tattoo artist who was visiting us for the weekend) did it...in my kitchen.

That was a strange night...

I love literary tattoos! I hope more people post. I have the names of my daughters in Tolkien's tengwar sindarin elvish on my shin...

And a willow leaf in autumnal colors separating the two...

From Breakfast at Tiffany's (the novella) Ellipsis 'covered up' an unintentional period, and I got to learn why tattoo artists hate doing lettering.

Before there was a show loosely based on A Song of Ice and Fire:

Anthem by Ayn Rand, one of my all time favorite books. This is the title of chapter 11, tattoo number 3 toward a full sleeve of words and phrases.

Yay, I figured out how to post these! The answer was obnoxiously easier than I thought it was in my rushed state yesterday hah.

This was really hard to take because of the spot on my arm that it's on, so I edited the hell out of it...

This isn't from a book or anything, it's just my "Hey, I write stuff, look at me!" tattoo.

Sancho, that owl tattoo is amazing! I've got the tombstone from slaughterhouse five that reads "everything was beautiful and nothing hurt" and I also recently became a member of the Two Dollar Radio Tattoo Club. And yes I got a huge box of free books for it and it was the greatest day of my life. They were kind enough to post the pictures on their tumblr.

Awesome, mishmish, I'm so glad someone's done it recently! I've been wanting to do it for like a year, but I haven't seen them post up new pictures on their website in a long time and dindn't know if they had stopped. I hope they gave you The Orange Eats Creeps, it's really cool, if not super fucking strange heh. I need to get on that, it's such a small tattoo!