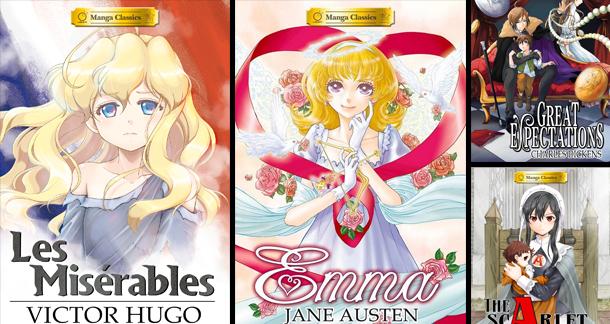 Manga couldn’t be further away on the literary spectrum from classic works, but Udon Entertainment has combined the two genres anyway. In an effort to bring young readers an engaging way to enjoy classic literature, the company has created Manga Classics, a collection of classics transformed into graphic novels.

The journey began when Morpheus Studios, a Hong Kong manga house, began converting Western classics into manga for the Chinese market. When those at Morpheus Studios met with Udon, however, the two companies realized they could join forces and bring the graphic novels to a wider, English-language audience as well.

So far the manga adaptations include Les Miserables, Pride and Prejudice, The Scarlet Letter, Great Expectations, and Emma. The graphic novels will hit shelves this month, with more releases coming later in 2015.

“Sometimes it’s hard for today’s young, visually literate readers to look at a wall of text and see that it’ll have action and adventure, romance and drama, which all these classic books have,” Stacy King, Udon’s marketing manager, said to Publishers Weekly. She also added that the classic storylines have been adjusted to create an enhanced reading pace and be easily understandable for modern readers.

So now I must pose a question to those reading this: What do you think of literary classics being transformed into manga? Is the move blasphemous, or brilliant? You be the judge!