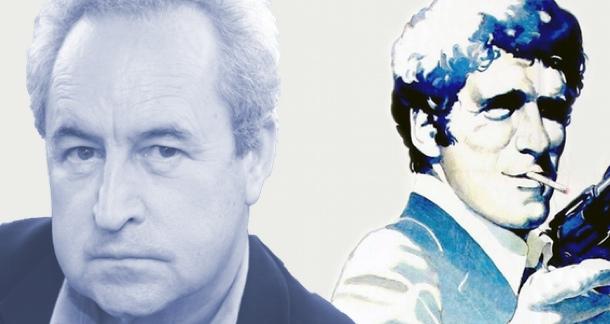 It was a cold day, the city below me was frozen like the eyes of the leggy blonde I had tried to chat up at the bar last night to no avail. The news desk was barren, not a case in sight, so I was practicing my other pastime, draining a bottle of Gordon's Gin while thinking about leaving this all behind, hanging up my reporter hat and taking on something sensible, like running a bookie operation for the mob. That's when she came to me with the case, an imitator in our midst, cashing in on a legacy held in high esteem in some circles...

An Irishman, John Banville, who took the name of Benjamin Black to hide his dirty deeds, had written a book starring the legendary private investigator Philip Marlowe, called The Black-Eyed Blonde. As far as I knew, Marlowe was the territory of Raymond Chandler, and Chandler bought the farm long ago, a bitter old man with a thirst for the bitter drink.

...as you can see, imitating Raymond Chandler's prose isn't too difficult. There's a whole stable of mystery authors who have made careers by mimicking Philip Marlowe's witty, simile-laden narration, but only one other, Robert B. Parker, had written an actual Marlowe novel before Banville/Black's foray into the territory. (One of Parker's books, Poodle Springs, was based on an unfinished Chandler manuscript, while the other, Perchance to Dream, was an entirely new creation that was met with a tepid reception by critics.)

Banville's novel features Marlowe in full, with references to the cases of Chandler's novels throughout and plenty of hat-tips to Chandler and Marlowe's legendary legacies. The New York Times Sunday Book Review had glowing praise for the book, and with an author as prolific as Banville, there's a chance this won't be the last time we see his take on Marlowe's unique view of Los Angeles.

Dino Parenti from Los Angeles is reading Everything He Gets His Hands On March 8, 2014 - 2:01pm

I saw him last night in Vroman's of Pasadena do a reading and signing. Actually, he has a local actor do the reading for him; he finds it uncouth that for an Irishman to read a Los Angeles noir aloud. He said that he wasn't opposed to giving Marlow another shot--that it fit Benjamin Black to a tee. He does have another Banville in the wings though, perhaps by the end of the year.