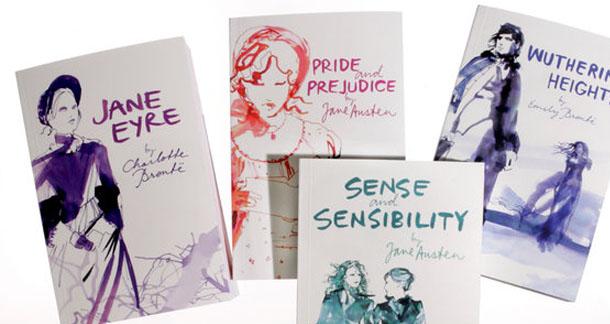 How do you get kids into stuffy classic literature? You trick them, of course. Classic texts in the public domain are being picked up by big publishing houses and repackaged with sexy new covers, explicitly aimed at teenagers raised on Twilight and The Hunger Games.

Book publishers are trying to ride the YA wave, which is the most robustly growing category in publishing. HarperCollins recently sold out by releasing a cover for Wuthering Heights with a stark black background, a close-up of a red rose and an inscription that reads, “Bella & Edward’s favorite book.”

Describing a new release of Dracula featuring a ghostly, platinum-haired woman floating in over a large pool of blood, the president and publisher of Puffin said, “We didn’t want to go with a muted approach. We had that Urban Outfitters customer in mind. We wanted to appeal to that teenager and give a fresh look to these stories that have been around a very long time.”

It might just be publishers out on a cash grab, but anything that keeps people from reading the current crap on the best-sellers list is alright by me.

artisan_roche from Manchester is reading Apples by Richard Milward June 29, 2012 - 9:35am

It's worth a try.

Heheh. The opening line of your article made me smile. :)

Though in fairness, designing covers that teens would like and sticking them on the classics isn't "tricking" them (let's visualize a room full of evil marketing people rubbing their hands together and cackling with glee—MWAHAHAHA). They're really just speaking to teens and tweens in their own language. The second someone implies that teens can't think for themselves —look, we tricked you into buying a book! HAAA!—is the second they'll tune out. And alienating the most technologically-connected & vocal generation in the history of Earth is probably a bad move.

I applaud the desicion to make more accessible covers that appeal to young people. Challenging the status quo—the idea that literature is for stuffed shirts only—is a step in the right direction. It's smart business and great for introducing a whole new generation to some of history's most compelling stories.

Like you said, anything that gets the gals hangin' with Heathcliff is fine with me. ;)

Next step? Getting more diversity in literature, introducing kids to voices who aren't just Western and white. That would be beautiful. Let's make it happen, people!