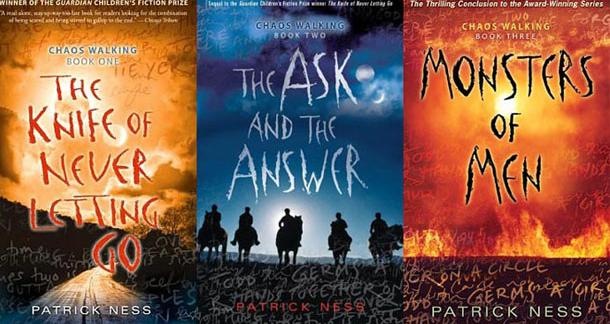 The Knife of Never Letting Go was released in 2008 and has won a number of awards. Here's the synopsis:

Todd Hewitt is the last boy in Prentisstown.

But Prentisstown isn't like other towns. Everyone can hear everyone else's thoughts in a constant, overwhelming, never-ending Noise. There is no privacy. There are no secrets.

Just one month away from the birthday that will make him a man, Todd unexpectedly stumbles upon a spot of complete silence.

Prentisstown has been lying to him.

Sounds pretty cool, and I'm excited to see what Kaufman could do with the material (though, to be fair, you could hand Kaufman the phonebook and he'd write a screenplay that would explode you brain). But am I the only one who reads Prentisstown as Penistown?

I read the first one. It was... okay. I'll be interested to see how the movie turns out, and if Charlie Kaufman is able to put his style in it. Despite what the synopsis might suggest, it's a fairly straightforward adventure story.

Joshua Chaplinsky from New York is reading a lot more during the quarantine April 24, 2012 - 9:42am

Do they think they're gonna be able to reign Kaufman in on this?

SGJ from Midland, Texas (but in Boulder, Colorado, now) is reading weird fiction and horror fiction and science fiction and literary fiction and innovative fiction, or maybe a romance or a western or a magazine on bowhunting or show trucks or anthropology April 24, 2012 - 8:18pm

yeah, I agree: the first book's a pretty straightforward story. not sure what he'll do with it.

I am always excited to give Kaufman a chance. I haven't read the books, but probably will before the movie is produced, as long as Kaufman remains on it. He may be writing it now, but screenwriting is a funny thing. By the time an actual movie is produced, it may be someone else.

Kasey from the morally and physically challenging plains of Texas is reading 12pt. Courier font April 25, 2012 - 11:14am

I haven't read these but I love the premise and will shuffle them somewhere in the deck of my reading - but like so many others, I can't help but feel that Kaufman will do no wrong.  I still think his "adaptation" of The Orchid Thief is one of the greatest out there, and one of the greatest examples of "out there."