Librarian Purposefully Bans a Book as an Exercise in Censorship 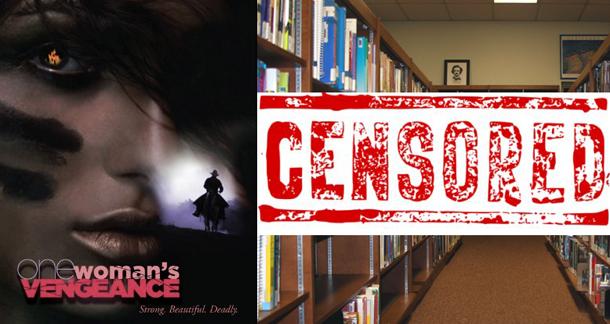 In order to accurately demonstrate the negative effects of censorship, a librarian at Mansfield University of Pennsylvania banned a book from his shelves, GalleyCat reports. "The very temporary banning was simply an object lesson to our campus community on the arbitrary and capricious nature of censorship," wrote Scott R. DiMarco for College & Research Libraries News.

The idea came to DiMarco and his staff members after a pitiful turnout to their Banned Books Week event. One of the attendees was Dennis R. Miller, the library's public relations director and, as it happens, a self-published novelist. They hatched the idea to ban his second novel, One Woman's Vengeance, to see just how many people emerged from the woodwork to protest. It was a good selection, since the narrative featured sex, violence and profanity, but was otherwise innocuous. Here's what happened, according to DiMarco:

A local newspaper reporter contacted Miller within 20 minutes of the posting [announcing the ban]. A Facebook protest page was created within a day and people from around the country were voicing their angry thoughts. One person even posted that he didn’t know books were still being banned…

The less positive outcome, in my mind, was that on a campus of 3,000, only eight people actually asked for a meeting with me to discuss the reasons I banned the book and to discuss what could be done to reverse the ban. The overwhelming number of comments were complaints about how they felt betrayed by this action or their frustration with the administration. Some used Facebook as a forum to make rude comments from the relatively safe distance social media provides.

The moral of the story? While many citizens in DiMarco's community were outraged and voiced their opinions in the social network stratosphere, very few attempted to actually do anything about it. "A few people have called this lesson unethical," said DiMarco, "but the really unethical part of what happened here was that many people simply sat back and said nothing in the face of the outright suppression of a book."

Is DiMarco's experiment a true microcosm for our society's apathy? At the end of the day, are we better at complaining than making significant changes to our own community? Discuss.

11 Reasons You Should Not Get A Degree In Library Science

I thought it was a brilliant move.  Nothing like shoving it in people's faces to make them see the truth.  Unfortunately, it didn't appear to have any effect on the general apathy of the campus population.  I'd say DiMarco's experiment showed a tiny slice of the apathy that's so prevalent in America on any number of topics, censorship being only one of them.

Robert Alexander II is reading nothing because he just finished a book, but he very well may start another one today July 18, 2013 - 6:51pm

That is most definitely a very interesting experiment. Most American's have short attention spans and shallow interests, and this experiment puts only emphasis on that point. People do generally prefer to raise hell with uninformed opinions when it's the popular thing to do, but very few are willing to actually think about things, much less do anything about it. Indeed, complaining is the easier course of action.