Language Ban: The 4 Words You Can't Say On Russian TV 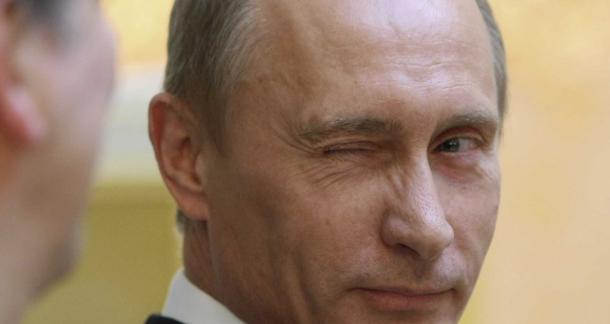 Fiddlesticks! Vladimir Putin has signed a law prohibiting swear words in books and outright banning them in plays, movies, and on TV. This gosh darned new law would mean heavy fines for anyone who lets a curse fly on screen or on stage, and books containing salty language will be shrink wrapped and have warning labels on the covers.

The big issue is with mat, a fascinating and nuanced sub-category of the Russian language that is all about swearing. Mat has its roots in the streets and even the gulag, but has become more and more integrated with the common lexicon. You can read about it in all its mother-loving glory here. This is highly, HIGHLY recommended reading.

The four big words you can no longer say in Russian media are:

khuy, which translates most closely to a C-word used to describe male genitalia.

pizda, which translates most closely to another C-word, THE C-word.

ebat’, which translates to the F-Bomb.

blyad, which translates to a W-word which unkindly refers to a lady of loose morals.

Though there are only four words listed, these words have literally thousands of derivations and permutations. Also of note, mat is based entirely in the sexual as opposed to the scatological or other realms. It's linked above, but you really must read this.

Irvine Welsh, author of Trainspotting and most recently The Sex Lives Of Siamese Twins, had this reaction to the new law:

It seems to be an attempt to erase and/or marginalize certain cultures, ie the working class, the ghetto, and so on. Language is a living, organic thing. If you start to try to control that and prescribe what people say, the next thing is prescribing what people think.

An article about censorship which is self censored.  I can certainly appreciate the irony.

EDIT: Noa that I think about it, its even worse then I originaly stated seeing as the word are on the page, just in romanized Russian. Really if your going to tist the words, just state the nearest English translation, Its in context and seems pretty justified time to use them rather then do all this dancing arround with euthamisms.

I just love it. Great stuff. Looks like no Russian translation for me.

But it's not like American Television is any different, that's why I don't watch the murder wenches. Or anything my favorite movie reviewer reviews.

maybe not, choosing not to use a word isn't censorship, not even self censorship, i'd say- just a choice.

Community Manager
helpfulsnowman from Colorado is reading But What If We're Wrong? by Chuck Klosterman May 11, 2014 - 4:41pm

I should probably clear the good name of LitReactor here and clarify that nobody asked me to censor.

You can offend people with swearing, and you can even offend people by NOT swearing. Definitely an interesting illustration of the ways in which black and white laws about language are problematic.

Joshua Chaplinsky from New York is reading a lot more during the quarantine May 12, 2014 - 7:50am

I think it's pretty obvious here that Peter's choice of words was a creative one.

I say, fuck that shit, cocksucker!