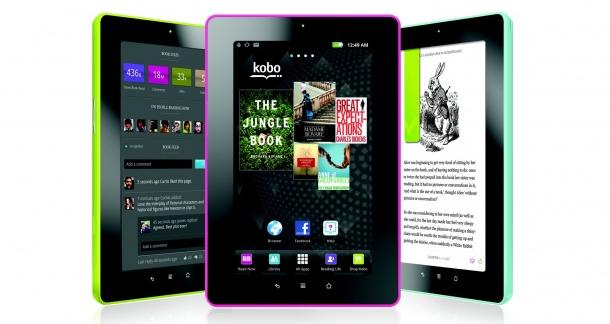 Kobo has entered the tablet wars with their announcement of the Vox, a web-enabled device that's being positioned as a rival to the Kindle Fire.

So it has less processing power than the Fire, but it does offer access to the Android Market, and a little more flexibility for storage (the Fire is locked into 8 gigabytes and will rely on Amazon's cloud technology for storing data).

The Vox is coming out Oct. 28, a few weeks ahead of the Fire. But while the Fire was lauded as a worthy (albeit less powerful) competitor to the iPad when it was announced last month, the Vox hasn't made nearly as big a splash, despite boasting similar features. Clearly Amazon has a bigger reach for marketing, but I imagine the execs at Kobo are kicking themselves for not announcing their tablet first.

If you're in the market for a web-enabled eReader, this could be a good alternative for people who don't want to tie themselves to the proprietary systems of Apple and Amazon.

The Vox is currently available for preorder.

The reason this will not be as good as Fire is that Amazon was smart enough to fork Android and as a result, get away from all the trappings of developing an Android device.

Agreed with Kirk.  Additionally, while Kobo has a decent stronghold on Canada and the UK, the North American market isn't having it.

Dwayne from Cincinnati, Ohio (suburbs) is reading books that rotate to often to keep this updated October 21, 2011 - 9:26am

I could be mistaken, but doesn't the Kobo have a strong market share in every English speaking country excpet the U.S.?

i think it also has to do with selection, of which the kobo has very little. i have a kobo, and i have had to convert most of the books i bought for it from amazon or google.