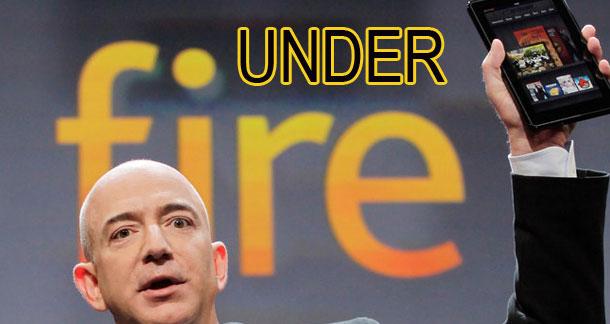 Perhaps I should be glad I removed the Kindle Fire from my Christmas list.  After all, I never got that "I have to have it" vibe and a new iPhone sounded better anyway (Siri, prepare for some late-night weirdness).  In theory though, it sounded like something I would have enjoyed--especially since it has browsing capabilities and I could have cut back on the amount I spend on comic books by going digital.

Now it turns out that I might have dodged a proverbial bullet after reading the myriad of complaints regarding the product, from both critics and customers alike.  "What complaints?" you may ask.  Here's the laundry list so far:

-There is no external volume control.

-The off switch is easy to hit by accident.

-There is no privacy on the device; anyone who picks it up will instantly know everything you have been doing.

-The touch screen is frequently hesitant and sometimes downright balky.

Usability expert, Jakob Nielson, trashed the Fire, saying it offered a "poor experience" and even went as far as to claim the older Kindle wins when it comes to reading books.  In short, Amazon has regressed in their bread and butter category of eReading.  "I feel the Fire is going to be a failure," Nielson said.  "I can't recommend buying it."

Amazon, of course, is well aware of the negative feedback and is attempting to shush naysayers with promises of improvement.  Drew Herdener, a spokesman for Amazon, recently commented, "In less than two weeks, we're rolling out an over-the-air update to Kindle Fire."  This update is said to improve navigation, functionality, and will give the user the ability to edit the list of items that show what they've recently been doing.

As with most first generation items, it looks like Amazon still has some bugs to sort out.  Kindle Fire is reported to be selling well--well enough to warrant the manufacturing of more units, according to Amazon.  However, as a consumer, it might be a good idea to wait until these issues are ironed out before dropping the cash to get one.

So LitReactors, anyone out there own a Kindle Fire and care to share their experience?

I bought a kindle fire for my wife and she loves it. I actually originally bought a kindle touch, but you can't adjust the screen (brightness, contrast, et al), and it has the most annoying flicker when you turn pages.

The fire has been awesome. The games are fun (basically most of the 'bigger' games that are available for iOs and android), the books look much better than I thought, even without e-ink, and the browser is fine enough for quick lookups. While it does have a couple issues (screen is not as sensitive as it could be), value-wise it kind of beats the hell out of a $400 ipad.

Yeah I got my Kindle Fire as an early Christmas present and I love it (and this coming from someone who never wanted an eReader cause I love physical books). The screen is easy to read and there's great contrast unlike the e-ink readers. I like how easy it is to look a word up using the built in dictionary. Save notes and highlight passages you like. Some fun apps you can usually get for free when they're offered that day. Real easy to get a book whenever I want to buy one instead of having to go to store or wait for it to be shipped. I've even watched some movies on it too while I have my free Prime (though whether I extend that I'm not sure about yet).

I haven't had a single regret as a tech purchase since getting it - love it.

I love mine.  Not a bit of a regret.  I've never hit the power button on accident.  It's not slow about anything.  The web is fast.  The screen hasn't stuttered.  Games play great.  Comic reading is great.  Books read well.  And Amazon is honoring Android's ten cent apps promotion.

EricMBacon from Vermont is reading The Autobiography of a Corpse December 12, 2011 - 11:41am

I don't know how anyone could prefer to read a book from a backlit screen. The contrast on e-ink is great, it looks like a book page. I can't read backlit for very long because it takes a toll on the eyes. I don't want gimicks with my ebook reader, but this is really a tablet. The only reason that I wouldn't get it is the same reason I will stay away from an ipad, it is too sandboxed. You are really not that in control of your purchasing ability because Amazon and Apple have the ability to push out any competition that it does not like.

My ebook reader is Barnes and Noble. This is because of the epub format, meaning that I can purchase books from any online store. It doesn't have to be B&N. This is a much better idea for the consumer, and if an author really knows how to sell themselves, it could be better for the author as well.

Forgot to say:  For a first-generation product, this is by far the best I've experienced.  I also got it as an early-xmas present, so I didn't pay for it.  And, I wanted it mostly for reading comics (which works great using Comixology), so anything else it does is just extra coolness for me.

My ebook reader is Barnes and Noble. This is because of the epub format, meaning that I can purchase books from any online store. It doesn't have to be B&N. This is a much better idea for the consumer, and if an author really knows how to sell themselves, it could be better for the author as well.

Just a note: anyone selling ebooks that is worth a damn also sells .mobi. I've bought several books from companies other than Amazon.

Book format wasn't an option for me. When I went back and forth between deciding whether I wanted a Kindle or Nook, I looked at formats and anything that was on Amazon was on Barnes and Noble and anything that wasn't on Amazon wasn't on Barnes and Noble - so for me it just wasn't a factor. Things I wanted were available either way and if they weren't nobody offered them.

Yeah I found the standard Kindle to be a far better e-reader than the Fire and returned the Fire.

The Kindle 3G is the one I have, and I think it's awesome -I don't think I'm ever buying a print novel again. I had the Touch, and then I heard Keyboard was even better -and I got one. Have to say, Keyboard's my favorite. I can see why people prefer the Touch and I didn't mind it, but I don't know, I'm used to a Keyboard and I like it a lot more than I thought I would. I think it's perfect -it can hold around 3,000 books and I won't be upgrading anytime soon. I'm really happy with it.