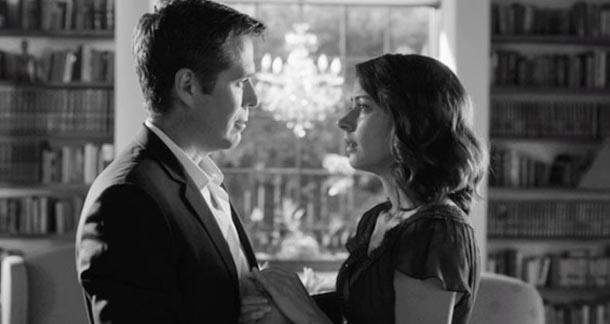 This summer saw the release of The Avengers, a huge endeavor by director Joss Whedon. Not only was it a financial juggernaut, but for my money, it was the better of this season's superhero films. Kudos all around.

But apparently shooting one of the biggest movies of the year wasn't enough for Whedon. No, he had to go and follow it up with a "micro-studio" film adaptation of Shakespeare's Much Ado About Nothing. Whedon shot the film in 12 days in his house. He also wrote the script and oversaw the music. Dude does not mess around.

The film stars Amy Acker as Beatrice, Alexis Denisof as Benedick, Fran Kranz as Claudio and Clark Gregg as Leonato. And, yes nerds, Nathan Fillion is in it too, as Dogberry. Check out the official website for more casting and movie info. The modern-day retelling has apparently screened at the Toronto Film Festival, but I haven't heard any chatter on it.

Who's excited for this? I'm a big fan of Much Ado--definitely one of my favorite Shakespeare plays. And though I've never been a big fan of Whedon, after The Avengers, I'll give anything he does a shot.

Who's planning on seeing this? Do you like this play? Anyone remember the Kenneth Branagh-directed version? Got a more favorite Shakespeare play? Tell us!

Jane Wiseman from Danville Virginia is reading The Iron Council, by China Mieville September 18, 2012 - 10:58am

I LOVE Much Ado and love the Branagh version, which will be hard to top. The play has its problems, which I thought the Branagh version mostly solved very nicely. The only thing I didn't like about that version was Michael Keaton as Dogberry. Too bad--I think he's a fine comic actor, but his approach to the very difficult task of making the puns and wordplay understandable was to rush through them so fast that it turned into gibberish. Also, grrr, he stole the funny bit about the horses from Monty Python.

But the big problem in the play is making Claudio's jealousy credible, and I thought the Branagh version did wonderfully well with that. Of course, Beatrice and Benedick, and their "merry war," are why the play has lasted so long. Branagh and Emma Thompson were just about perfect in those roles. And Denzel!!! Sigh!!!! Makes you wish Beatrice had run away with him and lived happily ever after as his duchess. Even Keanu Reeves was ok, because it just seemed like type-casting. It sort of didn't matter that he can't act.

So now. . . how will all this translate into the Whedon-verse? I'll be very interested to find out.

I'd see anything with Amy Acker.

Fred and Wesley back together again?!  Hooray!

I love Joss Whedon and Much Ado About Nothing. It is my favorite Shakespeare comedy.

I'm looking forward to seeing this, but it will never be better than the David Tenant/Catherine Tate version from Digital Theater. Those two make life more interesting. And their chemistry is superb :-)

Class Director
Rob from New York City is reading at a fast enough pace it would be cumbersome to update this September 18, 2012 - 11:42am

I went to see the Tennant/Tate version in London but Tennant had laryngitis and couldn't perform. Such a bummer. But still a great show. Tate was brilliant and my wife got a picture with her after the show.

I agree that NOTHING can top the Tennant/Tate production. Those two have the most ridiculous chemistry, and David was made for Shakespeare.

That said, Alexis Denisof should be a hilarious Benedick and sweet, lovable Amy Acker will be pretty damn perfect (though I would have loved to see Alyson Hannigan, too). And when was the last time the presence of Nathan Fillion didn't improve something? Shakespeare wishes he'd come up with "the hammer is my penis".

Fred and Wesley back together again?!  Hooray!

Shakespeare wishes he'd come up with "the hammer is my penis".

I enjoyed these comments immensely and second their sentiments.