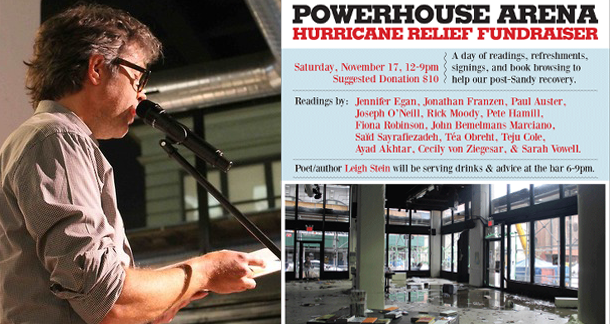 Jonathan Franzen, author of Freedom and The Corrections, a man with a reputation for hating readings, Twitter, eBooks... well, there's a long list, recently decided to pitch in and do a reading at Brooklyn's powerHouse ARENA bookstore as part of the Hurricane Sandy relief effort.

'He doesn't do these things. He doesn't do readings. Oh my god, this is crazy,' exclaimed Daniel Power, the owner of Brooklyn's powerHouse ARENA bookstore, just minutes after Franzen made a rare public appearance there on Saturday.

Powers started Sandy Hates Books as a hurricane relief fundraiser after his independent bookstore was flooded, causing some $30,000 worth of damage right before Christmas. He called authors, publicists, publishers and the public for help which resulted in a nine hour benefit last Saturday. And, as well as Franzen, it included people like Paul Auster, Jennifer Egan and Joseph O'Neill.

Franzen read "an eery, oracular passage" from his own disaster novel, 1992's Strong Motion for 15 minutes - and it was the first time he'd read it in public. When asked why he'd come out for the benefit, he replied.

'I love independent bookstores,' Franzen said. 'I survived Sandy completely unscathed and I really downright leaped at the chance to do something to help someone who has been impacted by it.'

But the funniest comment was when someone dared ask if he was planning to do anymore readings.

JEFFREY GRANT BARR from Central OR is reading Nothing but fucking Shakespeare, for the rest of my life November 24, 2012 - 8:08pm

Good Guy Franzen. I especially like the headline's exclamation mark. I wonder how many exclamation marks Jesus' return would rate? I guess we'll never know; he also quit while he was ahead.