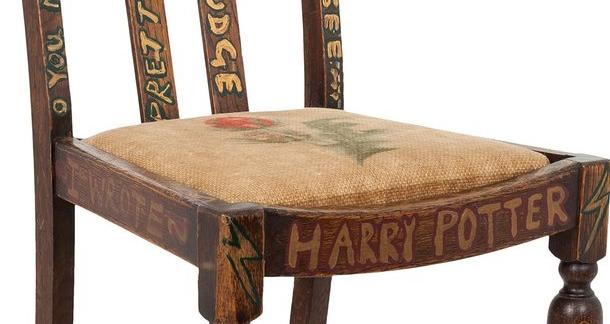 The chair J.K. Rowling sat in while writing the first two Harry Potter books goes up for auction today.

This fine chair is one of a set of four provided to Rowling when she was on government assistance and writing what would be the most famous books of ever. This particular chair was the one she wrote in because it was, allegedly, the most comfortable of the set, although it doesn't exactly look like a La-Z-Boy.

The chair originally went up for auction in 2002, following the release of Harry Potter And The Goblet Of Fire, which is the best Harry Potter book (Fight me. Fist fight me if you disagree), and before the auction Rowling painted the chair with the words "You may not find me pretty, but don't judge on what you see." She also painted on the less poetic phrase "I wrote Harry Potter while sitting on this chair."

What, so it wont be used by sororities? Color me dissapoint.