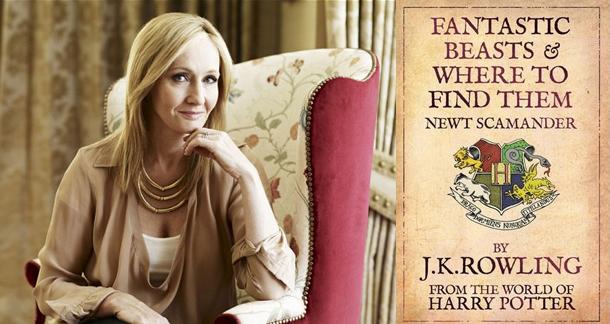 Deadline's Nancy Tartaglione reports that J.K. Rowling will return to her Harry Potter universe with a series of original films based on the fictional textbook Fantastic Beasts And Where To Find Them. This Hogwarts book first appeared on a reading list in Harry Potter and the Philosopher's (Sorcerer's) Stone and later became a "real-life" book.

Rowling asserts the new films are neither sequels nor prequels, but rather spin-offs featuring "magical creatures and characters from the Potter mythology, including the textbook’s fictitious author, Newt Scamander." The first film will start in New York, 70 years before Harry's adventures begin. More from Deadline: "Fantastic Beasts will also be developed across Warner Bros’ video game, consumer products and digital initiatives businesses."

Tartaglione also reports that as part of this new "extended relationship," Warner Bros has also nabbed distribution rights for the BBC's production of Rowling's adult novel The Casual Vacancy.

Who's excited about this new Harry Potter-related venture? More importantly, who is surprised Rowling is returning to this much-loved (and successful) universe?

Screenwriting and novel writing aren't always compatible skillsets. There are good novel writers who are horrible screenwriters. It will be interesting to see if she can hold herself to a 100 page script, given that she has been writing novels several hundred pages long.

Sound from Azusa, CA is reading Greener Pastures by Michael Wehunt September 12, 2013 - 9:43am

I'm surprised and excited. This looks like it can be fun.

I was pleasantly surprised by this. While I had hoped she would look into the idea of creating an encyclopedia of the Harry Potter universe, I think this is going to make fans of her work very happy since it seems like such a solid idea (I'm certainly excited about it).

Looks like someone took a lunch with George Lucas...