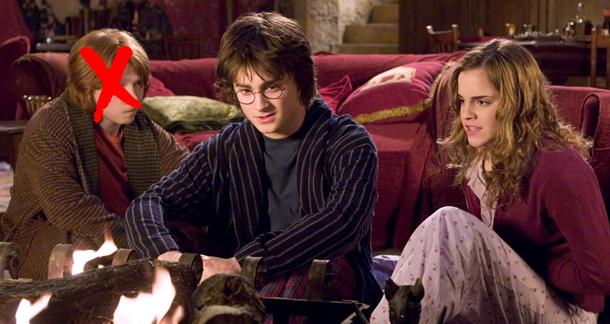 Throughout the Harry Potter series, JK Rowling proved herself completely willing to kill off likeable and important characters. I still shudder and tear up whenever I think of the tragic fate that befell Dobby the house elf.

As it turns out, she almost offed one of the most pivotal characters halfway through the series: Ron Weasley.

That fun bit of trivia came up when Rowling was being interviewed by Harry Potter portrayer Daniel Radcliffe, for a special feature on the Harry Potter and the Deathly Hallows: Part 2 DVD (coming out November 11!!!).

"Funnily enough, I planned from the start that none of them would die. Then midway through, which I think is a reflection of the fact that I wasn't in a very happy place, I started thinking I might polish one of them off. Out of sheer spite. 'There, now you definitely can't have him any more.' But I think in my absolute heart of heart of hearts, although I did seriously consider killing Ron, [I wouldn't have done it]."

I really hope the interview expands on that. The series was built on the friendship between Harry, Ron and Hermione, and that would have been a huge change to the dynamic, albeit a gutsy move.

And I'd be curious to know what put Rowling in a bad place. She went from a financially-challenged single mother to the only career author on Forbes' billionaires list. I wonder who she was trying to spite.

That would have been horrible! Gutsy, sure, but horrible all the same.

Joshua Chaplinsky from New York is reading a lot more during the quarantine October 31, 2011 - 2:52pm

She totally should have iced that ginger ballbag.

Dwayne from Cincinnati, Ohio (suburbs) is reading books that rotate to often to keep this updated October 31, 2011 - 3:31pm

Was she that rich when she wrote the middle of the series?

Even if she wasn't that rich, she was certainly successful. Maybe she was in a bad place because of the pressures of being so popular a writer. One of my favorite bands broke up because, as they were getting big, the people around them wanted them to change styles or write this kind of music or have that kind of presence. They fell apart from being torn in so many directions.

That's also why I think Meyer wrote such a crappy last book. I mean, the whole series was weird, but that last book was just...ugh. it was written to cater to all readers, to make everyone happy. I think she broke under the pressure of fame.

Rowling stayed strong though. And Ron made it to the end! My favorite character. Thank goodness.

I've killed so many of my characters...I would be interested in hearing more about the particulars she considered in offing him. You will let us know if that surfaces, won't you? :)