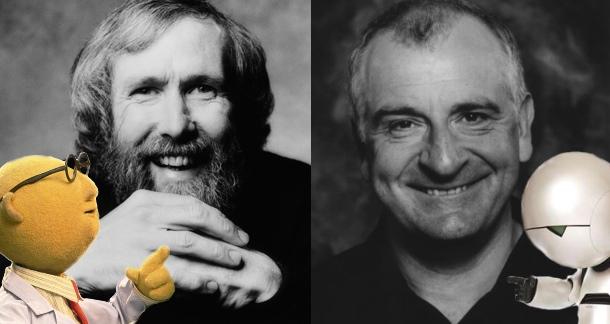 According to Jim Henson's Red Book journals, the Muppet master first met Hitchhiker's Guide To The Galaxy author Douglas Adams twenty-nine years ago this week. They had dinner and shortly afterward developed the concept for a Muppet Institute Of Technology television special. With their mutual passion for technology, the two creative masterminds set about planning a program that would use familiar Muppet characters to "raise awareness about the potential for personal computer use and dispel fears about their complexity."

While the project never came to fruition, there are some concept sketches over at Henson.com. The one-hour special would have featured Muppet Institute Of Technology Dean Dr. Bunsen Honeydew giving a tour showcasing technology used for special effects and robotics, Fozzie working in the Department Of Artificial Stupidity ("proving that computers are only as funny as the bears that program them"), and Henson himself working with a Muppet control device called Waldo.

Adams did go on to consult in some unknown capacity on the Labyrinth video game, and Henson's Creature Shop eventually created the animatronic characters in the 2005 film version of Hitchhiker's Guide To The Galaxy.

Both Henson and Adams hold a very special place in my heart, so when I read about this collaboration that never was, I couldn't help but daydream a bit about how incredible it would have been. Then I stumbled across a brand-new video where Ben Folds works with the Fraggles (my youth all smashed into one five-minute clip), and I started thinking about other amazing collaborations that could have been: Darren Aronofsky with Neil Gaiman, Dr. Seuss with Tim Burton, David Lynch and Edgar Allan Poe...

What about you? If you could see any two creatives, dead or alive, collaborate on a project, who would they be?

I'd pair Burton with Edward Gorey.