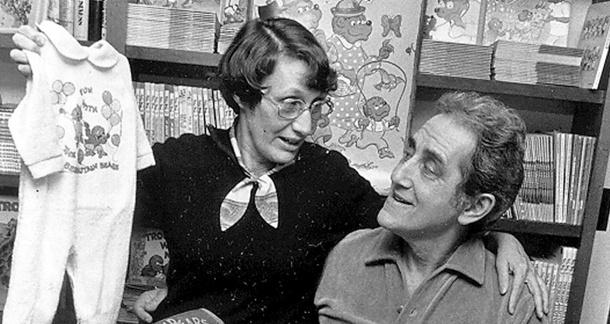 Via the Associated Press

In 1962, Stan and Jan Berenstain released their first children’s book, entitled The Big Honey Hunt. It marked the beginning of a beloved children’s series that, 40 years later, is still going strong. Sadly, on Friday, Jan Berenstain passed away, at the age of 88, after failing to regain consciousness from a stroke. Her husband, Stan Berenstain, died in 2005.

The couple met in 1941, on their first day of art school. They spent time apart following the breakout of World War II, with Stan working as a medical illustrator in an Army hospital and Jan serving as a draftsman for the Army Corps of Engineers. She also worked as a riveter, helping assemble Seaplanes for the Navy. In 1946, the couple married, and found steady work as illustrators until they created The Berenstain Bears, a series of books aimed at preschool age children that dealt with everyday issues, such as talking to strangers, doing chores, and jealousy of a new sibling. The books were picked up by Random House, with the help of editor Theodor Geisel (aka Dr. Seuss). Since then, over 300 titles have been released.

After Stan passed away in 2005, Jan continued to collaborate on the books with her son Mike, who is also an illustrator. His older brother Leo is a writer who became heavily involved in the business end of the franchise. More recent releases have dealt with more modern problems, such as online safety and childhood obesity.

The Berenstain Bears books remain perhaps one of the most beloved and influential children’s franchises of all time, selling approximately 260 million copies, with translations in 23 different languages, including Icelandic and Arabic. Mike Berenstain will continue writing and illustrating future books, citing his mother’s prolific output that continued until she died, as his inspiration.

Every day she was productive. She was working on two books and had been doing illustrations until the day before she passed away.

In 2011, Jan Berenstain was interviewed by the Associated Press, and acknowledged that she was happy to be working at an age well past that of most American retirees.

It’s wonderful to do something you love for so many years. Not everyone has that.

Dude. Those were my first books I ever read.

After I read Berenstian Bears Learn About Strangers, I became really anti-social.