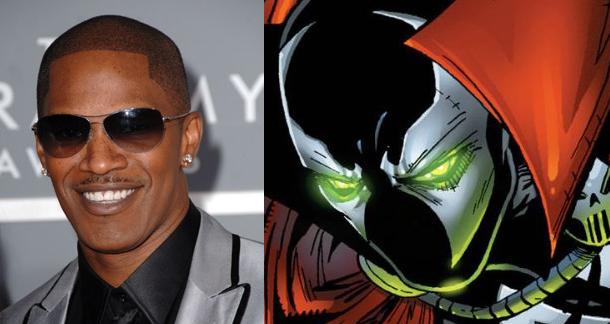 SlashFilm reports that Jamie Foxx is "aggressively pursuing" a Spawn reboot, with support from comic book creator Todd McFarlane backing up his pursuit.

Like most of the nerd-gasm news to surface of late, Foxx first publicly expressed interest in the film at Comic-Con, though McFarlane hinted at Foxx's involvement back in February. In an interview with MTV, he said:

Of course, McFarlane was referring to Foxx's turn as Ray Charles in Ray, a role that garnered him the Oscar.

Spawn is a title that could actually use an update. The mid-90s version wasn't well-received, and watered down a lot of the grit and violence of the comic book to obtain a PG-13 rating. McFarlane wants to restore those elements and produce a serious film based on his creation, and working alongside Foxx as both actor and producer will certainly help him keep this vision.

What do you think of Jamie Foxx as Spawn? Or a grittier cinematic take on the book? Let us know in the comments section.

The 90's version was a severe disappointment. I'd welcome a reboot.

I'd love to see a reboot.

The problem with Spawn is that Todd McFarlane is a brilliant artist, but he is no writer. That has become increasingly apparent through the arc of the comic book, which has a story that has been going nowhere for 20 years.
Todd needs to reboot Spawn completely from the top down, and hire a decent, commited writer for the project.

Thumbs up to this pairing.

The only way to make Jamie Foxx into a good actor is to put a mask on his face so i'm down for it.

Dwayne from Cincinnati, Ohio (suburbs) is reading books that rotate to often to keep this updated August 1, 2013 - 4:37am