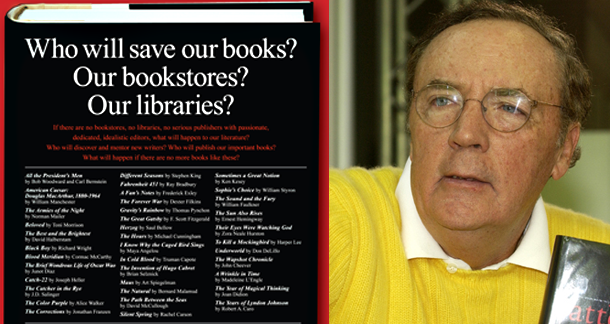 It’s tough being a wealthy and successful author, always faced with the perennial problem of just what to do with all that money. Stephen and Tabitha King donate to libraries which isn’t a bad thing. J.K. Rowling endowed the Soldiers’ Charity with the payoff from her leaked pseudonym case. Now, multi-multi-millionaire James Patterson has decided to put money into bricks and mortar.

Following his full page ad in the New York Times Book Review calling for a government bailout of the publishing industry, Patterson is putting his money where his mouth is and donating $1 million to independent bookstores. He was on CBS This Morning yesterday promoting his new kids book, Treasure Hunters, when he made the announcement, but there are conditions: the stores have to be “viable,” and “have a children’s section”. Patterson went on to lament the demise of independent bookstores:

We’re making this transition to eBooks and that’s fine and good and terrific and wonderful, but we’re not doing it in an organized, sane, civilized way. So what’s happening right now is a lot of bookstores are disappearing, a lot of libraries are disappearing or they’re not being funded, school libraries aren’t being funded as well. This is not a good thing. It used to be you could find books everywhere. You go to Sweden, Sweden has 8 million people, a book will sell a million copies there.

I liked his anecdote about getting his own kids to read.

Patterson did concede that a million dollars isn’t going to go very far, but “he does hope that it will be a start, a shot in the arm in the form of some extra cash for hard-working booksellers”. Let’s hope he’s right or we may lose bookstores as we know them forever. Is this going to change things? Will it encourage more investment and, perhaps more importantly, use of independent bookstores? I’d like to think so.

You can watch the full interview here: